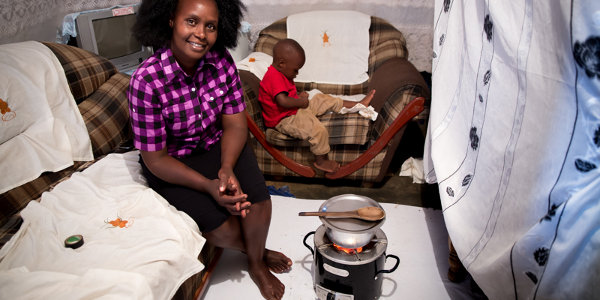 Charcoal is big business in Africa, generating billion of dollars annually, and creating employment for millions of people. But its impact on health and the environment is detrimental.

When he visited the Democratic Republic of Congo in 1990, entrepreneur Peter Scott witnessed the impact that using charcoal and firewood for cooking is having on forest resources. He spent the next two decades working as a consultant for governments and NGOs to design fuel-efficient cooking technologies. But most of these projects had little impact in dealing with deforestation.

The Jikokoa retails for about US$40. In Kenya, traditional metal and clay stoves however sell for only about $3. BURN general manager for Kenya, Eoin Flinn, says the company has disproved perceptions that local households wouldn’t buy such an “expensive stove”.

“The market is so big, we are not scratching the surface yet,” adds Flinn.

The company’s customers include low-income households who rely solely on charcoal, but also the urban wealthy who mostly use liquefied petroleum gas (LPG), but need charcoal stoves to make githeri (a popular Kenyan dish of maize and beans which requires hours of boiling).

The Jikokoa product is available in more than 1,000 locations across Kenya, including leading supermarket chains like Nakumatt, as well as small kiosks. BURN works with several distributors and wholesalers. Flinn says getting the distribution right is “a big feather on our cap” because some people initially assumed it would be impossible to distribute the stoves across the country.

“These [wholesalers and distributors] can get a product across the country for just $0.25. They cram them into small trucks packed full of other products like pots and pans. We now have 150 active distributors. One sells to 177 supermarkets, and some supermarkets have several branches. It’s a great network.”

“Our goal is to convert all 15,000 Equity Bank agents into sales representatives for Jikokoa. We just did a pilot in [central Kenya] and trained 170 agents. One bank branch has a network of about 80 agents. We want one of those agents to become a stockist for Jikokoa, while the other 79 will offer sales services at a commission, and the physical bank branch can offer credit if the customer needs it,” Flinn explains.

BURN has however faced challenges setting up its manufacturing operations in Kenya. The company launched a Ksh.500m ($5.2m) factory in 2013. But when budgeting and preparing for the factory, Flinn says they failed to consider many things.

“Just to pull electricity from a transformer on the road to the factory cost $16,000 in copper lines. And that’s just so you can turn the lights on. In other places across the world, when you rent factory space it’s assumed you will at least walk in and turn the lights on,” adds Flinn, who spent years working in manufacturing in China.

Initially they leased space at an industrial zone in Nairobi. But one day in 2013, as they were waiting for a group of potential investors to visit the plant, the unimaginable happened.

“We were trying to impress the investors. There was a veterinary clinic right behind the factory and about 15 minutes before they arrived a sewer exploded. They got out of the car, smartly dressed, and before them was a river of waste running. They had to tip-toe in this river just to get into our factory. Now that doesn’t happen in many other places.”

“The lazy option is to outsource production to China,” says Flinn. But such an arrangement would lead to high charges for transportation and import duties, and limit the company’s ability to respond to customer demands.

“It is harder in Kenya, but cheaper in the long-run. One has to understand that to get over the initial investment hurdles.”

BURN’s research and development team is currently working on no fewer than 10 different stove designs. It plans to introduce better kerosene and LPG stoves.

“We don’t want people to be cooking on charcoal indefinitely. We want to look beyond wood and charcoal as cooking fuels, and find something sustainable.”