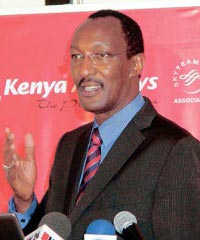 KQ commenced with flights from Nairobi to Luanda today (17 August), giving Kenyans and other regional and international travelers direct access to the oil-rich nation.

KQ will operate the route on a code share agreement with TAAG Angola Airlines twice a week, every Tuesday and Friday.

A delegation headed by Kenya’s foreign minister, Moses Wetangula, and the Angolan ambassador to Kenya, Ambrósio Lukoki, were reported to be onboard the inaugural flight.

Titus Naikuni, chief executive officer of KQ, said Angola is an important destination for the airline because of its rising economic importance as a trading partner for several African and European countries.

Naikuni added that the airline will help passengers with processing visas to Angola since Kenya does not have an Angolan embassy. He expressed confidence that the two countries would set up missions in their respective capitals to promote bilateral relations.