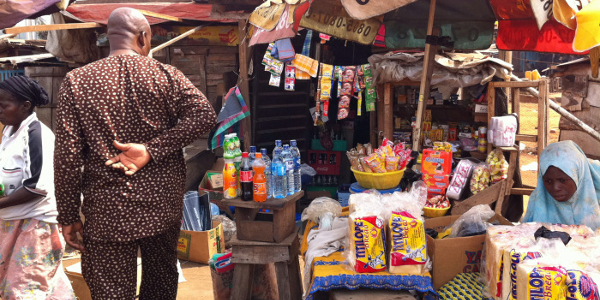 It is a busy morning at the Nyakuron market in Juba. But along with the meat, produce and textiles, economic hardship is also on display, as South Sudanese struggle to buy and sell goods that have become increasingly more expensive, especially within the last year.

“The business is not going fine,” said 28-year-old butcher Joseph Khemis, who works at the market. “People are not buying things like they used to buy before, right now. So I am not getting enough money.”

The country has been rattled by conflict that began in December 2013, as well as hunger, and an 836% inflation rate as of October. There is a shortage of US dollars, and the country’s currency has fallen from 18 South Sudanese pounds to the dollar one year ago, to about 74 now.

Khemis says conflict means it is difficult to bring cattle from Uganda and Rwanda, where he used to buy them. Before December 2013, he could buy a bull for about US$160; today it costs him roughly $540. As a result, he now charges customers approximately $3.50 for a kilo of meat. Three years ago, they paid about $0.50 per kilo.

In a nearby stall, 22-year-old Jackie Kirabo sells ladies clothing. She says that last year, she would have charged a customer roughly $20 for a suit; now she asks about $34 for the same outfit. And she says they do not like the increase.

“They just run away, ‘Oh, nowadays we are not going to dress.’ Because everything [prices] is up, they are also suffering. They come here, they say, ‘We are not yet getting salary, we are suffering, we do not yet know what we are going to do,” said Kirabo.

Not far away, Stima Arafa is selling produce. She explains that because South Sudan has to import almost everything, especially from countries like Uganda, they are heavily dependent upon the US dollar.

“But now, when the dollar has started to increase, it is the one that brings now the problems,” said Arafa. “But if it was not like that, everything would be well.”

Ugandan Robert Mugabe Katseigaire came to Juba seven years ago for business opportunities. He and his wife sell food staples, but he says their profits have steadily decreased, and this means they have less disposable income for travel.

“We used to go home after six months, seven months, in Uganda to see our people,” said Katseigaire. “But nowadays we have spent almost a year [in Juba] minus going. This means that the earnings of last year were much better than the earnings of this year.”

According to the World Bank, oil makes up about 60% of South Sudan’s GDP and accounts for almost all its exports. But export revenues have declined due to a decrease in production and in global crude prices.