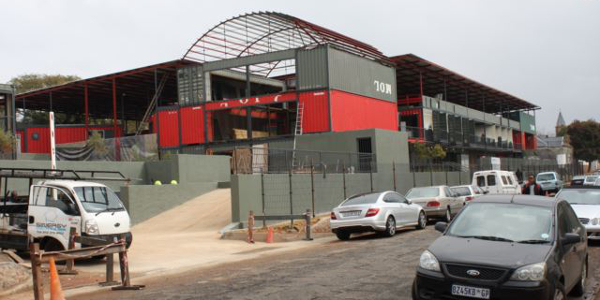 The 27 Boxes “shopping mall” is constructed from shipping containers. It is the first of its kind in Africa. Photo by Darren Taylor / VOA

A “shopping mall” constructed entirely out of shipping containers is nearing completion in Johannesburg. The architectural design is called 27 Boxes, because each container is 27 square meters. It is a first for Africa, and is modeled on similar projects in London, Paris and Christchurch.

Construction workers add finishing touches to the 27 Boxes project in the creative Johannesburg suburb of Melville.

“We had extremely limited funds. It continued to rain. As we [dug] down, we got rock, which delayed the project. We’ve never done a retail development and this one took me by surprise at how long it would actually take,” explained Blake.

Blake said he did not want to build just another shopping mall, of which the city has plenty. “They’ve got no character; they’re just brick buildings.”

He wanted to do “something different” at the site, something he’d never before attempted: to construct an affordable shopping space entirely from shipping containers.

The recycled material is significantly cheaper to build with than conventional steel, brick and mortar. This project cost about R32m (US$2.5m) as opposed to R45m ($3.5m) for a traditional build.

But, from the outset, said Blake, there were plenty of skeptics. “People just said containers are shacks on steroids.”

But Blake’s vision of completing the development for Melville’s “dreamers and artists”, as he calls his soon-to-be tenants, wouldn’t die.

“This unique opportunity just started developing in my mind, that we could create a space for these guys. Simultaneously, we could develop the park into a very artisanal zone,” he said.

Shave said about 100 containers will be rented to people selling products you won’t easily find at a mall packed with franchise stores: from craft beer to Philly cheese steaks and wood-fired bread, to handmade jewelry and clothing.

“We’ve done a very good job,” she stated. “To make sure that we have a very good mix of people, that it’s people who’ve got high-end, beautiful quality products [to sell]. There’s a strong focus on making sure it is artists, and then giving them an opportunity to open a store.”

A cheaper alternative to renters

On average, the containers will cost about $400 a month to rent, much cheaper than stores in the big malls, which can easily cost 10 times more.

This has made it possible for people like Sian Mylroie to be one of 27 Boxes’ first tenants. “I’m going to be opening a nursery. I’m going to be mostly selling veggies and herbs, and hopefully be selling fresh veggies and herbs to the little restaurants that are opening [here] as well so that they can all keep organic and fresh,” Mylroie explained.

Shave said 27 Boxes, with its many open spaces, will be one of the most environmentally-friendly shopping areas ever in South Africa.

Blake said several internationally renowned architects have congratulated him on what he describes as his “dream project”, and 27 Boxes is set to open within a few weeks. – VOA