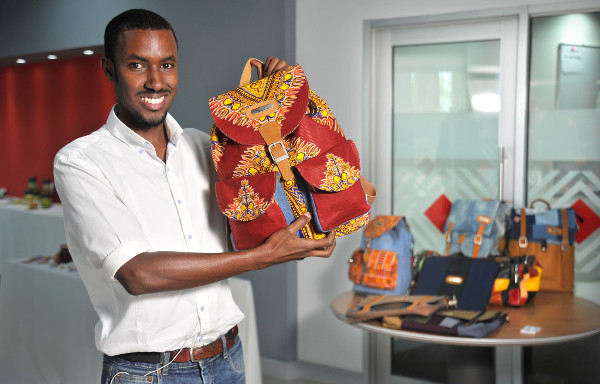 When you walk the winding alleys of Gikomba market in Nairobi, giant piles of used clothing represent a sort of afterlife for previously-loved garments. Here, and other markets, is where you will often find Mohamed Awale, 29, rummaging like a man on a mission.

He is the co-owner of Kenyan indie-fashion brand Suave, which (by its own admission) breathes new life into old. The brand markets and sells vibrant, uniquely Kenyan bags, laptop sleeves, slim fold wallets and satchels – all made from materials sourced from second-hand traders, factories and tanneries. Suave uses off-cuts and unwanted morsels to create vivid and fashionable accessories.

A self-confessed lover of bags, Awale had the idea to create his own brand shortly after finishing university at the age of 24. His first job in the corporate world was completely channelled into finding and paying for a workshop space and getting the first materials for production. But, he still didn’t know which kind of bags he wanted to make.

He remembers the day he first thought of using second-hand clothing as a production material.

“I was still thinking of leather, but were starting to wonder if we shouldn’t be using something else that would distinguish it from the other bags on offer in Kenya. It came to me when I was shopping in one of the biggest markets here in Nairobi: why hasn’t someone ever tried to make a bag out of a used piece of clothing?” he explains.

Five years later, with stockists in Nairobi and Stockholm and the possibility of new contacts in Europe, Awale struggles to give up the job of sourcing fabric to anyone else in the business. He wants to be the one finding the right pieces of material.

Suave currently employs 10 people and has a capacity to produce around 300 bags a month. The brand’s online presence embodies the spirit of Kenyan youth, which a recent visual collaboration with independent filmmaker Joash Omondi, depicts vividly.

Awale would readily admit that he had to learn that he didn’t need to do everything himself. There was a time where he was involved in all areas of the business: purchasing material, trying to keep track of orders, learning to stitch in the workshop so he could jump in and help. But when times got tough in terms of cash flow and delivering on orders, he realised it would be beneficial to get a business partner and share responsibility.

Awale was also the brand’s very first model. When Suave first started producing satchels he would simply wear the just-finished product and as soon as friends wanted to buy it, he would sell it and another one would be made. But the breakthrough came when he wore the very first backpack that the workshop produced in its unique blend of repurposed material and bright kitenge fabric.

“The first day that I was wearing it was really shocking. People were stopping me in the streets to ask where I got it,” he remembers.

Originally the business was simply handling orders on online platforms without being e-commerce enabled, but then started building the backbone of their own digital store and website. Before it was ready, however, a video portraying the story of Suave went viral and orders started streaming in.

“We had so many orders coming in – from all over the world, places like Pakistan and Barbados for example. We just said yes when people asked if we could ship to them, and only started finding out afterwards how we would get the bags there,” Awale says.

They ran out of bags in a week and started taking pre-orders. “A month into this someone working at DHL must have seen the video and set up a meeting with us. We had to tell them we were using the local post to deliver – you should have seen their faces.”

DHL Express offered its assistance with the international shipments, immediately cutting down the delivery time from the previous two-week minimum to four to five days.

“People were receiving their bags within a week. Some of them would immediately order another bag.”

Soon Awale will be off to France to meet with possible stockists there. He dreams big of wanting to be a global brand with an ethos of sustainable fashion through revitalisation and repurposing, but stresses that Africa comes first. “I want the brand to be known as an African brand with an African presence. That is what is most important.”