When Malawian fashion designer Lilly Alfonso was just six years old, she would attack her clothes with a pair of scissors to modify dresses into a design of her choice, much to her mother’s despair. However, when she was a bit older, her clothing alterations and designs caught the attention of friends and family who started asking her to do the same to their clothes. 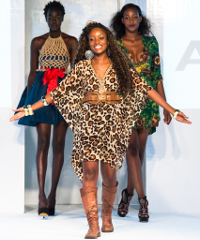 “So I started charging people for my services. Before I did it just for fun,” Alfonso told How we made it in Africa.

At the age of 24 she started her tailoring business and it was not long before she was dressing contestants at Malawian beauty pageants, including all participants of the Miss Malawi pageant in 2006. Alfonso’s work did not go unnoticed and she was convinced to enter the Malawi Fashion Edition (FAME) in 2010, where she won the Best Fashion Designer award.

“So that was when I started accepting myself as a designer,” she reflected. “Because before I used to think… that maybe people had to have a certain level of education to be a designer, in my mind.”

Since then, Alfonso’s designs have been showcased at a number of international fashion events, such as Africa Fashion Week London. Last year she was selected to represent Malawi at the Africa Fashion Reception in Paris.

“Of 54 countries in Africa, 20 countries went through to be represented in the show and to be one of them selected to represent Malawi, I was privileged.”

According to Alfonso, there has never been a better time to be in the African fashion industry as it is receiving a lot of international attention.

“African fashion is going far. Every time you wear something African in European countries people look around and come and ask you about it. It’s amazing how people are supporting the African fashion industry which makes me proud to be Malawian and African at the same time, especially in European countries, or anywhere in the world,” she highlighted.

Alfonso uses Malawian fabrics from the country’s cotton farmers and while she said textile production, and the fashion industry in general, is still developing in the country she is optimistic about the future.

She added that some investors have approached her looking to invest in setting up her label’s production outside of Malawi, where there is better machinery and skills.

“I said no. What they like about my fashion style is that it’s Malawian,” said Alfonso. “And if they train [Malawian people] and teach them, and if they bring machines, they will do three times better than they did before… because I don’t want to make it in life and then see my country is poor. It doesn’t make me any better.”

One of Alfonso’s challenges is that fabric and design production in Malawi is slow, due to old machinery, and she often struggles with delays.

“But investors want to have this production made in China… which doesn’t help me in any way because I want to create jobs for my fellow Malawians.”

She added that she often uses Chrissy Migiga’s fabric in Malawi, where women who are handicapped or are high school dropouts are trained in fabric design. She also gets her fabrics from the Malawi Council for the Handicapped (MACOHA). Alfonso hopes the attention their fabric gets in her designs will help these organisations gain more support.

Today Alfonso has clients throughout the world from Europe to Asia and across Africa. However, another challenge she faces is the cost of exporting her designs to these countries. “The cost of transporting goods can be higher than the cost of the outfit.”

In addition to a network of fabric designers, Alfonso has nine employees managing her designs in her workshop. However her dream is to open her own factory and create jobs for hundreds of people, especially women.

“A lot of women in Malawi are high school dropouts and they don’t have the resources to support themselves but if we invest in them and introduce them to other jobs for the creative mind… then we will have a better Malawi in the future.”

Her advice to Africa’s creative women is to never give up on their dreams and view the challenges they face as a way of growing stronger.

“It doesn’t have to be fashion, but if you are creative in any way you have to push for your dream. Keep trying as much as you can… because it’s not an easy road. You will get people who will disappoint you… but you need to stay focused on your dream. We all learn and become better through our mistakes and challenges,” she concluded.