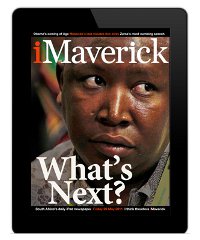 While some describe the look of the new iMaverick as more of a magazine, publisher Branko Brkic says it is a “fully-featured daily newspaper,” containing everything about South African and global business, politics, life, sport, arts and lifestyle.

The iMaverick will follow on the success of the online Daily Maverick, which was launched in late 2009 after the demise of Brkic’s print titles, Maverick and Empire. The iMaverick will be the next step in offering readers a fully-fledged digital media product, potentially bridging the divide between readers’ preference for online content and their penchant for a traditional print media brand.

Brkic describes the tablet revolution as a wave and says “we want to be on the cusp of the wave”. He strongly believes in the value of a “really good editorial team in bringing you a comprehensive, well-considered and thoroughly researched publication”. The iMaverick team will be staffed with 25 journalists, some of whom will be dispatched as foreign correspondents to cover international stories.

A 24-month subscription to the iMaverick will include a new iPad 2, with prices starting at R395 (US$58) per month. A subscription deal that excludes the iPad 2 will be announced in two weeks’ time, “but it will be significantly lower than the price of any printed daily newspaper,” says Brkic. At this stage there is no option for users who want to buy a single issue at a time.

Brkic has a three year plan to publish a range of publications for the tablet medium. These will include a weekly lifestyle magazine and four monthly magazines. The lifestyle magazine will probably appear within six months after the launch issue of iMaverick. Brkic also says that his three year plan includes Africa becoming more of a target market.

South Africans know the pain of waiting for the world’s newest tech gadgets, but Brkic says they are in constant contact with Apple to try and ensure the availability of enough iPads. If the iMaverick succeeds in drawing the 20,000 to 25,000 subscribers it hopes to in the first 12 months, South Africa’s media landscape will have a bold new contender.