Over the next few decades Africa’s population is expected to expand to more than that of China or India, constituting about 23% of the global population by 2050. 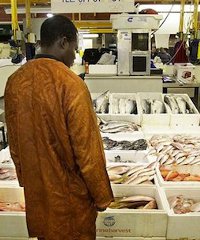 According to the author, aquaculture can contribute to job creation and alleviate food insecurity.

It is also expected that Africa’s urbanisation will continue to increase, following trends witnessed in the last 50 years. About 50% of Africa’s population will be living in cities before 2025, according to these forecasts. African Futures 2050 predicts that the populations of West and East Africa will be two and a half times those predicted for North, Central and Southern Africa combined by 2050. Although this movement contributes to an increase in human productivity it is not sustainable, and will place a huge demand on governments and states to provide sufficient survival opportunities.

Africa’s coastline stretches for about 32,000 km along two oceans and four seas: the Atlantic and Indian oceans, the Red Sea and the Mediterranean. Africa also has large inland waterways such as the Congo, Zambezi and Nile rivers; inland lakes such as Lake Victoria, Lake Malawi and the Great Lakes of Central Africa; and major dams, like the Aswan (Egypt), Kariba (Zimbabwe) and Gariep (South Africa). Most of Africa’s major cities are situated along these coastal zones, rivers or lakes, with requirements for food from these ‘reservoirs’ expected to continue rising. Most human maritime activity – such as fishing, exploration, shipping and tourism – is conducted within 200 nautical miles of the shore and many populations derive their livelihoods and much of their dietary nutrition directly from these environments. In Africa the fishing industries contribute not only to the animal protein intake for about 20% of its population, but also directly or indirectly to their livelihoods through job creation.

In 2000, the Food and Agricultural Organisation of the United Nations (FOA), in its report The Role of Aquaculture in Rural Development, noted that almost 1 billion people in the world still suffer from hunger and malnutrition and do not get enough food to lead a normal, healthy and active lifestyle. This is also true in many areas of sub-Saharan Africa where fish consumption is too low to benefit vulnerable populations. The FAO report also noted that the production of wild capture fisheries could not increase unless effective management plans were put in place to alleviate the overexploitation of depleted or recovering stocks and to rebuild overfished stocks. Ever-increasing populations and changes in eating habits will put further strain on availability and require the doubling of food output over the next twenty years.

Urbanisation requires rural development to reduce hunger, eradicate poverty and address job creation. Development of the agricultural sector, specifically fisheries, could provide high-quality protein, essential nutrients and minerals that are often difficult to obtain from other food sources. Inland fisheries and aquaculture, which entails farming with plants and animals in the maritime domain, can provide economic opportunities and allow for alternative and continued food production where other sectors may fail.

This is where aquaculture can contribute to job creation and alleviate food insecurity and malnutrition, while at the same time contributing to food production and associated benefits. Aquaculture in Africa is, however, hampered by poor governance and management, access to land and other issues such as gender discrimination and child labour. Sustainable food security strategies must thus, among others, develop new opportunities, increase productivity in agriculture, and assist in the development of domestic markets that can withstand international economic volatility. Investment in aquaculture is one of the most important keys to job creation opportunities that simultaneously contribute to poverty eradication and to sustainable long-term food security. Such investments will improve the competitiveness of domestic production, increase farmers’ profits and make food more affordable for the poor.

Governments should, in acknowledging these challenges, address the problem of urbanisation and of the protection of their maritime environment and resources, and optimise the potential benefits that can be derived from these alternative food sources, but also use these initiatives to address the challenges of hunger and job creation. What options are there?

Experience from similar initiatives elsewhere shows that the private sector should be encouraged to take the lead, but that public investment is the catalyst in providing economic or marketing incentives that the private sector cannot offer. These investments should consider the rights of existing users of land and related natural resources, benefit local communities, promote food security and not cause undue harm to the environment.

Food security and human security are inextricably linked and innovative initiatives are needed to create opportunities to face continental challenges regarding future food security requirements. Creative strategies supported by dynamic leadership and management is the only way that Africa will be able to achieve the envisaged ‘integrated, prosperous and peaceful Africa’ in which its population does not experience fear of want.

Johan Potgieter is a senior researcher at the conflict management and peacebuilding division of the Institute for Security Studies in Pretoria, South Africa