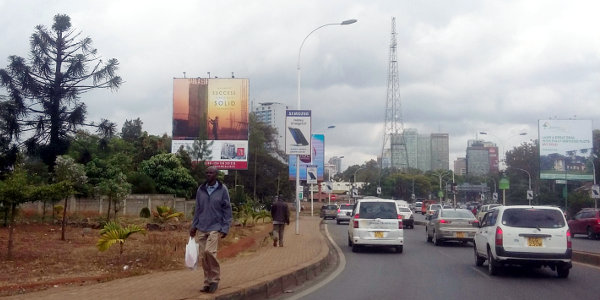 The banking interest rate cap in Kenya has probably been the single hottest topic of African investment commentators over the past two years – certainly within the publicly listed company space where we invest. I don’t think a week goes by without us reading about rate caps.

We are just back from a conference hosted by Standard Bank’s Kenyan business, CFC Stanbic Bank, where the key speaker was the member of parliament (MP) behind the interest rate cap bill that surprised both the investment community and the Kenyan banks when it was passed in middle of 2016. The impact has been widespread, with our main interest being listed banks’ profits coming under pressure as they were forced to lend at lower rates. The chart shows how Equity Bank (Kenya’s largest bank by market capitalisation) has seen its return on equity (ROE) coming off from around 25% over the past two years, to closer to 20%. The impact of the rate gap is gradual, as old higher-priced loans take some time to mature, and new lower-priced loans are issued. 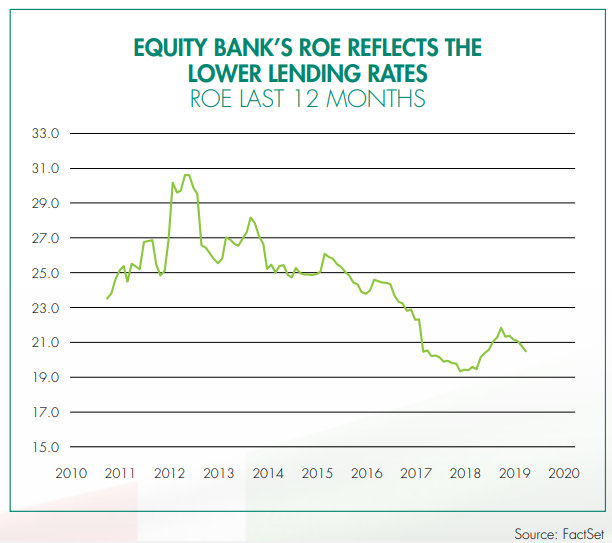 Listening to MP Jude Njomo present his story behind bringing the interest rate cap to life, I was hard pressed to see why any of the voting politicians would not have been in support. He began with his own experience of getting a loan to buy beds in order to offer boarding for scholars in his home town. He went on to say that the Kenyan banks (either individually or as a group) didn’t even bother to comment at the public participation required before the interest rate cap bill is passed or enacted.

The reason the interest rate issue has again come under the spotlight in the past month or so is that the Kenyan High Court ruled in March that any penalties associated with non-compliance were unconstitutional. The court did rule that there would be a 12-month period in which to relook the legislation.

It was interesting to hear the different responses of the listed banks we met during our speed-dating sessions at the conference. Following the shock of the introduction of the rate caps in 2016, most of the banks have, to some degree, restructured their business to operate in a lower rate environment and are finding other and cheaper ways to generate revenue. This includes closing branches and growing mobile and electronic banking.

Most of the listed Kenyan banks felt that the rate cap was likely to stay, and even if it were to be amended, raised or scrapped, that lending rates were unlikely to shoot up again. One of the reasons is that a number of unsecured lenders have stepped in to fill the gap left by traditional banks. In particular, many new age ‘fintechs’ have gained share, and this new competition is likely to keep rates in check. Safaricom’s M-Pesa is probably the most well-known one. Safaricom launched a new lending product, Fuliza, earlier this year.

Leaving rate caps aside, we certainly left Kenya more positive about the Nairobi listed companies than when we arrived. The same can be said for the Rwandan and Ugandan businesses we met. Rwanda continues to benefit from its low base and a strict and an ambitious president. Meanwhile, Uganda could be in for a boom if final decisions are made on the oil industry – as to whether to build a pipeline to the coast, and whether to run it through Kenya or Tanzania. Don’t hold your breath though … this decision has been ‘imminent’ for at least five years.

Conversely, we are very bearish on Tanzania, based on what we read and the results being reported by the listed companies. The one Tanzanian bank we were scheduled to meet with didn’t arrive, so it would have been interesting to see if our views on Tanzania would have shifted.

The strategy we manage has been underweight to East Africa for some time now, but with the growth outlook seemingly better than we previously thought, we will certainly be reassessing our positioning. Saying this, we are still concerned that underlying growth is not as strong as the reported GDP growth. In addition, gambling continues to take a high share of the consumer wallet. Since the leading betting company is now sponsoring Formula 1, it is clearly sucking a lot of capital out of the economy.

Kenya’s Nairobi Securities Exchange was the strongest performing African market over the quarter, advancing more than 20% in US dollar terms. The market was helped by East African Breweries’ share price strengthening following strong H1 results to December and Safaricom moving up in line with better sentiment towards emerging markets. By country allocation, Kenya is the third largest holding in the strategy, at 11%, after Egypt (27%) and Nigeria (20%).

The conference was held at Lake Naivasha, which sits in the East African rift valley. Naivasha is the heart of one of Kenya’s key export industries: fresh cut flowers. Other major exports are tea, coffee and tourism. One of the most interesting sights along the 100km journey from Nairobi was seeing groups of ducks and turkeys standing peacefully along the side of the road. And not just any road, the main highway between Kenya and Uganda. It is normal in African countries to see live chickens for sale along the road, but they are kept in cages. Our driver explained that ducks and turkeys don’t stray off while effectively waiting to become dinner. For those lucky enough not to end up on the plate, when it gets dark and the store owner heads home, the birds all obediently follow him or her home for their own dinner. If only all meat cold chain logistics were this simple.

This trip note was originally published by Old Mutual Investment Group, following a visit by its Equities team to Kenya.