In 2006 students from 25 universities and colleges across the world took part in a project to design a plug-in electric hybrid vehicle. At the end of the three year Vehicle Design Summit they had produced four hybrid cars run by solar, biofuels, and human power. 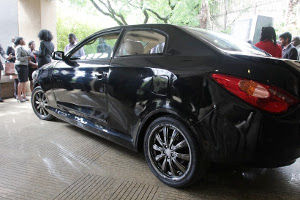 The Kiira EV SMACK was recently unveiled in Nairobi.

Among participants in the exercise, headed by the famed US-based Massachusetts Institute of Technology (MIT), were students from Uganda’s Makerere University. The experience inspired them to embark on a project to develop a ‘Made in Uganda’ hybrid car.

In 2011 they unveiled their first car, the Kiira EV Proof of Concept. Although the Kiira EV had some weaknesses it became a foundation to build on.

Uganda’s Ministry of Trade Industry and Cooperatives took up the Kiira electric vehicle project and improved on the Kiira EV model. The government then set up the Kiira Motors Corporation (KMC) which plans to actualise commercial production of the car. Earlier this year KMC was allocated 100 acres at the Jinja Industrial and Business Park.

In mid-November in Nairobi, KMC unveiled a prototype of its sedan hybrid electric vehicle dubbed the Kiira EV SMACK, marking a first in East Africa. The five-seater sedan is powered by a rechargeable battery and also has an internal combustion engine-based generator which charges the battery.

“The Kiira Motors project is the brainchild of university research, which has been the model for innovations and economic growth in the developed countries. This project will impact the economic reforms that are currently being undertaken in the respective East African partner states,” said Uganda’s High Commissioner to Kenya, Angelina Wapakhabulo, at the unveiling.

Albert Akovuku, chief operations officer of the Kiira Electric Vehicle Project tells How we made it in Africa the team will be traversing East Africa scouting for investors. KMC requires US$350m to set up a manufacturing plant and actualise its goal of producing its first commercial car by 2018. A KMC team was also in London earlier this month meeting potential investors. KMC announced it had held discussions with the Hinduja group, a global conglomerate, on manufacturing and assembling in Uganda.

Akovuku says investors should expect to make returns “within 10 years” adding that KMC’s target is to capture 15% of the market share in East Africa within a decade.

The Ugandan government has already pumped $70m into the project. According to Akovuku, in its first year of production KMC will make 840 cars per month adding up to over 10,000 units annually. It will employ over 500 people.

When released into the market, the sedan will retail at about $30,000. Akovuku says buyers will be able to pay for the car over a five year period. He adds that compared to new sedans that are imported, buyers will save on transportation costs and import taxes.

Although the Kiira EV SMACK prototype was received with enthusiasm in Nairobi, some argued this was not really a ‘Made in Uganda’ car but more of an assembled product. Akovuku agrees that some parts were imported, but argued this is the norm, even among industry giants like Germany’s Mercedes-Benz.

“We too would like to avoid vertical integration. We cannot do everything,” he says.

Nonetheless, he says the car is designed for the region, given the state of the roads, weather conditions and affordability to consumers.