In 1965, Britam Insurance Company was established in Kenya and has evolved over the years to become one of East Africa’s leading diversified financial services groups. A fortnight ago, Britam Group was feted as the top firm in Kenya in the Company of the Year Awards (COYA) and its CEO Benson Wairegi was named CEO of the Year. 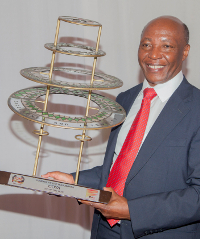 Wairegi told How we made it in Africa that despite the group’s many successes in the last five decades, the journey “has been very challenging”.

“We are now a listed company which is another major achievement and we are one of the largest players in the financial services sector in this market. To achieve that has not been easy,” he says. “We have been able to achieve that because of the very good team we have… they are very well qualified, experienced and we work as a team.”

The group has diversified beyond insurance with interests in banking, private equity and asset management. The group is currently aggressively expanding its interest in real estate, a sector which has been attracting increased investment in Kenya.

“Yes we have been in property development since the 1990s when we built our first office block, but because of the returns and the current demand for real estate in all the various segments – residential, office blocks [and] hotels – we [saw] an opportunity that we needed to exploit.”

Last week Britam announced it had acquired a 25% stake in property development and management consultancy firm Acorn Group, to strategically position itself in the property market. During its listing in 2011, Britam’s management said part of the funds raised in the IPO would go towards investment in real estate.

Further regional expansion is also at the top of the agenda for Britam’s management. The group currently operates in Uganda, South Sudan and Rwanda and is planning to set up in Tanzania and the rest of East Africa by 2016. Wairegi says the group’s insurance business is growing fast in Kenya and the region while its asset management line is “growing very rapidly”.

“Regional expansion is only logical; East Africa is a big market of 140m people. If you really want to grow you must follow the lead of government [in East Africa cooperation] and open operations in these countries.”

However, the expansion presents many challenges.

“[For instance], to go into a foreign market involves getting licence by a government in that country. The government requires certain information from you. To put that information together, then break into those markets is a challenge in itself. I am happy that we are already making good inroads there, but to get to a point where we can operationalise a company in a foreign country is not an easy thing.”

The company has also had to “invest a lot of money” in IT to become a customer driven organisation that delivers efficient services. Wairegi adds that the complexity of running a diversified financial services group that has presence in different geographies which have different languages and regulatory frameworks is also challenging.

Wairegi, who has led the group since 1984, says being the boss comes with many responsibilities and can be a difficult job.

“It is [a difficult] job but; what lightens the burden is the team I talked about. I am able to delegate a lot of my responsibilities,” he says. “At the end of the day it is a job we have to do: we have to deliver value to the shareholders and customers and we just have to execute.”

He advises CEOs in Africa to develop a good strategy and effectively execute it.

“I would give a number of recommendations based on my own experience. Number one are people: build a very good team… when you get those people on board, ensure that they are a team. It is one thing to have good people, it’s a different thing to develop a team where people work for a common good.”

“Africa has become an emerging frontier market. The economies in Africa are growing very fast. It is driven by very many factors including population [growth], investment in infrastructure, education and urbanisation.”