When mass murder and destruction broke out in Rwanda two decades ago, 12-year-old Ashish Thakkar and his family were among millions of refugees who had to run for their lives. 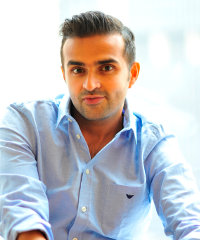 Thakkar and his family took cover at a hotel in Kigali, which was famously portrayed in the Hollywood film ‘Hotel Rwanda’, with hundreds of other displaced families.

Earlier this month Thakkar, now 32, returned to Kigali to announce that his new investment vehicle Atlas Mara is buying a stake in the commercial banking subsidiary of the state-owned Development Bank of Rwanda.

Atlas Mara was founded by Thakkar and former Barclays boss Bob Diamond with the aim of acquiring stakes in existing African banks and financial institutions. In December 2013, the company raised US$325 million through an initial public offering on the London Stock Exchange.

Thakkar and Diamond were in Rwanda on the eve of the 20th anniversary of the genocide to sign the deal. Thakkar tells How we made it in Africa the timing “could not be more apt”.

“I left Rwanda twenty years ago under the worst possible circumstances, but now after all these years, we are seeing the country back on the right path thanks to the incredible work of President Kagame’s government,” says Thakkar. “We have a great deal of confidence in the future of Rwanda… and that is exactly why we’ve invested in the Development Bank of Rwanda.”

Thakkar’s family lost everything in the genocide and eventually fled to neighbouring Uganda. At age 15 he started selling computers and founded his own business with a $6,000 loan.

Today he is described as Africa’s youngest billionaire. Thakkar runs the Mara Group, a diversified conglomerate with interests in technology, manufacturing, real estate and agriculture.

Teaming up with Bob Diamond

Diamond and Thakkar decided to establish Atlas Mara after meeting at an event last year. The two business moguls started talking about their philanthropic work and the business opportunities in Africa.

They met in New York a number of times to discuss the idea of an investment vehicle that would ride on Diamond’s banking experience and Thakkar’s understanding of the gaps in the sector in Africa.

A renowned banker, Diamond resigned as Barclays CEO in 2012 after the bank suffered heavy fines following revelations that some of its employees had been trying to manipulate inter-bank lending rates.

“Bob Diamond is truly an expert in financial services,” says his business partner Thakkar. “Bob has a tremendous passion for and understanding of Africa… The Diamond Family Foundation is doing great work in Africa and so is the Mara Foundation, and this is what brought us together.”

Thakkar explains that post-genocide Rwanda is an interesting investment destination because of the steps the country has taken in creating a regulatory environment that attracts investors.

“I truly believe that Rwanda is about to take off, Bob and I share that view. And if we didn’t believe that, we wouldn’t be making this kind of investment there,” he says. “Now with this investment, which will of course prompt other investors to come to Rwanda, the enormous entrepreneurial potential of our people will be unlocked and that is very exciting. So, ten years from now you will be talking about a different Rwanda; one that is a hive of economic activity and a financial hub in the region.”

He describes the Development Bank of Rwanda as “a great bank with even greater potential”.

The Rwanda deal is not Atlas Mara’s first on the continent. The firm earlier announced it was acquiring Botswana-based financial services company BancABC for as much as $265m.

“The deals that have been struck in the past few weeks mean that Atlas Mara now operates in six countries, but that’s just the beginning. We see many opportunities throughout the continent. We don’t want to limit ourselves,” says Thakkar.

“And by leading, we don’t mean the biggest, we mean the best. We want to help unlock Africa’s incredible potential, and be a part of the amazing developments that are happening everywhere on the continent.”