Africa’s commodities and resources are in demand, yet moving goods within the continent is prohibitively expensive with supply chain management and freight logistics being particularly challenging. Infrastructural development and thereby, establishment of transport corridor efficiencies is a critical springboard for the continent’s growth as well as a cost efficiency driver. 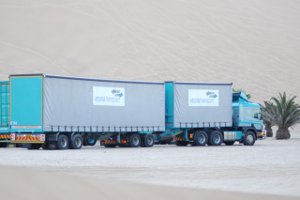 A good infrastructure network is the springboard for growth and development.

“Intra-African trade has increased by 20 percent per year since 2001,” says de Beer, citing South African Reserve Bank figures, which indicate that total direct investment by South Africans in the rest of Africa has increased at least eightfold since 2001. In 2010, in the region of 16 percent of the country’s total exports were to African partners with around one third of non-mineral intra-Africa exports being produced in South Africa.

Infrastructure development to date includes bridges, ports, roads and railways, e.g. via the MCLI project in Mozambique. De Beer points out a number of important projects in Africa, which “are being developed by companies from outside Africa”.

As the world’s focus on Africa as an investment destination heightens, it is imperative that businesses are enabled to deliver goods on time, cost effectively and undamaged. For southern Africa, which faces significant challenges in this regard, solutions that effectively balance road, rail, water, pipelines and air are critical.

“Solutions that optimise southern Africa’s end-to-end supply chain must be identified and critically, must be supported by cost effective and efficiency-driven infrastructure,” says de Beer. “Greater use of multi-modal logistics solutions would contribute significantly to heightened regional competitiveness.”

He explains that this approach to freight transport leverages a combination of transportation modes. “The primary benefit is a reduction in total landed costs. In addition, through reduced cargo handling, security is improved and damages and losses reduced,” he says. “Multi-modal solutions will increasingly incorporate the likes of Namibia’s infrastructure, which is currently seeing major investment in the likes of Namport,” he says. The port is an alternate to the often congested Cape Town and Durban ports.

The Trans Kalahari, Walvis Bay and Maputo Corridors are growing the region’s strategic importance,” says de Beer, citing the example of the Maputo and Walvis Bay ports, which he says shows significant potential as an economic driver. Traffic volume of the Trans Kalahari corridor alone has tripled in three years, largely due to goods in transit to Angola.

Regional and continental expansion, enabled through more successful collaboration is not a choice but a necessity. Such expansion will likely be focused on consumer and commodity markets. “The economic growth of the region depends on consistently greater movement of goods, with these two markets offering substantial growth opportunities,” says de Beer.

“Infrastructure is undoubtedly the springboard for growth and development. Business, governments and regional bodies must work together to ensure that the return on investment delivers sustainable benefits to the regional economy. The contribution of logistics to economic growth is optimally leveraged to this end,” concludes de Beer.