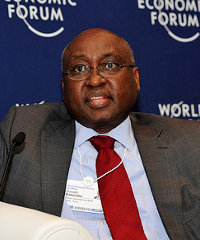 The African Development Bank (AfDB), in a view that we share, recently said that there is little risk that the political crisis in North Africa could spread to the sub-Sahara region, but escalating oil and food prices are the main worry.

The statement was made by Donald Kaberuka, the AfDB president. “I don’t see copy cat events in sub-Saharan Africa,” Kaberuka said in an interview. “The thing to worry about more is if the oil and food prices continue going north. With the kind of urbanisation we have there could be issues of managing social tensions in many of our cities,” he said.

As Reuters notes, oil prices have risen to above US$100 a barrel, raising worries that food prices could climb as well. In 2008 international oil prices rose to above $140 and food prices climbed and led to protests in many countries around the world. Indeed inflation is starting to creep up in many African countries, with policymakers citing food as the main culprit. Food security was also a “serious problem” and the AfDB would invest in agriculture-related infrastructure to support farmers, Kaberuka said without giving more details.

Kaberuka said, if anything, the North African crisis had potential to foster democracy on the continent and raise investor confidence. “I think the events in North Africa will create more confidence for the investor because suddenly you have more political openings, you have greater transparency. In the long term I think it will boost investor confidence. You will get conditions for longer term stability,” he said. Kaberuka said the sub-Saharan region’s economy would grow by 5.5% this year but this was not enough. “Growth is getting closer to pre-crisis levels. What Africa needs is not 5.5%, it is 7% and we need a sustained 7%,” he said, adding high commodity prices will support growth in the region.

He noted that upcoming elections in various countries on the continent are bringing back a degree of political risk. “The other big risk in Africa is that we are having 17 elections. Often these elections do not necessarily immediately lead to stable conditions,” he said, citing Kenya and Ivory Coast as examples.

But all in all the AfDB, like most economic think tanks, expects sub-Saharan Africa to continue to show strong growth through 2011 and beyond, despite any political shocks that may muddy the waters.