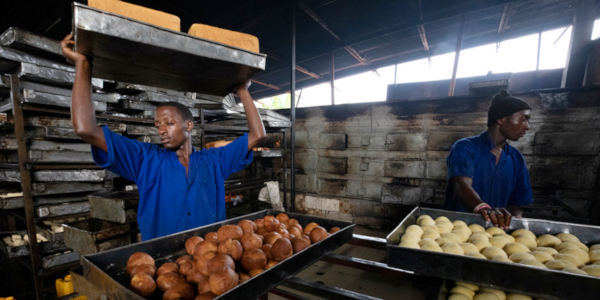 In East Africa, a region with some of the world’s fastest-growing economies, six countries – Burundi, Kenya, Rwanda, South Sudan, Tanzania, and Uganda – are increasingly interconnected. Lower tariffs, freer movement of goods and people, and reduced bottlenecks such as restrictions on services, have helped many businesses expand operations.

In Kigali, Rwanda, for instance, business is booming for Bakhresa, a company that produces wheat flour. Originally founded in Tanzania 44 years ago, Bakhresa expanded its operations into Rwanda in 2010. Its entrance into the market lowered the price of wheat flour, making it an easily accessible commodity for all in Rwanda. The effects reverberated across the local economy as entrepreneurs prospered and jobs were created.

Hanifa Nyiragumuriza is a food vendor who lives in Kigali. Her workday begins shortly after sunset and ends only as the sun begins to rise over the lush hills of Rwanda’s capital. Nyiragumuriza prepares steaming batches of chapatti and mandazi (doughnut-like pastries) throughout the early-morning hours to satisfy hungry workers finishing late-night shifts.

The baked goods are a treat for her customers. For Nyiragumuriza, 52, and her family, they’re a steady source of income that’s helping build a better future. “This business has helped me pay school fees for my 10 children,” says Nyiragumuriza, serving customers in her dimly lit food stall.

Today, flour is a key ingredient in the foods on Nyiragumuriza’s daily menu. But for many years this basic commodity was too costly for her – and most other street cooks in Rwanda.

Until recently, one company only controlled Rwanda’s flour production and it couldn’t meet the country’s demand for wheat. Because of the lack of choice and high prices, flour was simply unaffordable for many food vendors like Nyiragumuriza, who would sell mainly vegetable- and meat-based dishes. “I sold fried potatoes, cassava, and chicken for many years, but their popularity was gradually waning, and I had to think of new ways to get my customers back.”

Bakhresa noticed that wheat was in short supply – and saw an opportunity to enter the Rwandan market.

Timing was everything. In 2011 the government of Rwanda had set up a special economic zone (SEZ) to encourage new businesses, and Bakhresa Rwanda was one of the first to set up: It established a subsidiary, Bakhresa Rwanda, in Kigali’s SEZ.

Since local wheat production is low, Bakhresa Rwanda relies on imports, which transit through the Tanzanian port city of Dar es Salaam. Flour and bran processed in Rwanda then find their way to markets across East Africa.

“Our goods move freely between Rwanda and Burundi,” says Veeraju Vanapalli, Bakhresa Rwanda’s financial controller, “as well as [across many] common borders, such as Tanzania, Burundi, Uganda, and Kenya.”

The company initially managed to lower the price of flour by nearly 30%. This reduction, coupled with the better-quality flour, allowed Bakhresa Rwanda to capture market share and grow its revenue.

With IFC’s support, Bakhresa Rwanda is now in its ninth year of operations, employing more than 200 workers. Due to high demand, the factory – which operates 24 hours a day, seven days a week – has doubled its initial production capacity to 500 tonnes per day.

“Seventy percent of our production goes into the local market,” says Vanapalli. “The remaining 30% is exported – mainly to the Democratic Republic of Congo and Burundi.” These exports make up 30% of the firm’s revenue.

Since Bakhresa’s expansion into Rwanda, it has started similar operations in Malawi and Mozambique.

Zano Mataruka, a senior investment officer at IFC, has overseen the project for the last six years.

“When the government decided to allow Bakhresa in, it collapsed local flour prices and made flour more affordable,” Mataruka says. “So at the end of the day, wheat-related products have moved away from almost being a luxury to being affordable – which they should be.”

The company now has expanded its distribution to the entire country, relying on a chain of small businesses that serve as intermediaries between the company and its customers. This means that Nyiragumuriza and other local food vendors are assured of a steady supply.

As demand for wheat flour increases, so do business opportunities for entrepreneurs who run small and medium enterprises – people like Consolée Uwanyirigira, a wholesaler in the district of Muhanga. In the past three years, her business has grown from two employees to 15. Uwanyirigira sells other commodities at her shop but attributes high sales to the availability of wheat flour. She believes it prompts people to purchase other items, such as cooking oil.

“We have become rich people,” she says, wearing a big smile as she sits behind the counter of her shop.

Now she sells 10 tonnes of flour per month, yielding almost 3 million francs (about $3,250). “From this amount I am able to pay my taxes, school fees. I thank God.”

The impact of increased access to wheat flour cascades from wholesale retailers to shops like New Vision bakery. Its owner, Jean Ntahobari, started out as a palm-oil hawker in Bugesara, a district in eastern Rwanda, and later moved to Kigali where he learned how to make and sell pastries on the streets.

Access to affordable wheat flour was a turning point for Ntahobari’s business. He now proudly supplies about 100,000 loaves of fresh bread per day across Kigali – the product of 150 sacks of flour. He employs 14 permanent staff and 80 temporary workers. But Ntahobari remains modest about his achievements. “I started with a simple frying pan. I was transporting the bread and mandazi on a bicycle. From there, I bought a motorbike. And now, I have cars to distribute the bread.”

Ntahobari says: “I am able to sustain my family and the families of my staff. I can pay off my taxes and I hope my business can continue to grow.”