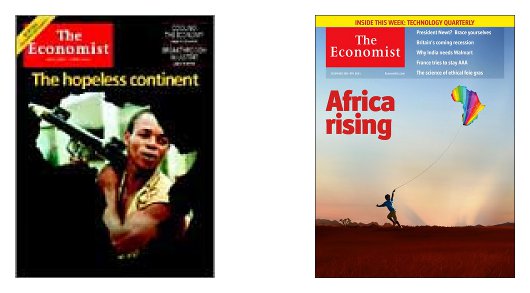 From “the hopeless continent” to “Africa rising” – how The Economist made a U-turn on Africa.

In May 2000, respected magazine The Economist on its cover called Africa “the hopeless continent”. One of the articles painted a picture of a continent ravaged by war, famine and disease.

“Floods in Mozambique; threats of famine in Ethiopia (again); mass murder in Uganda; the implosion of Sierra Leone; and a string of wars across the continent. The new millennium has brought more disaster than hope to Africa. Worse, the few candles of hope are flickering weakly.”

Eleven years on, and the magazine is singing a different tune. The cover of a recent issue features an illustration of a boy flying a rainbow-coloured kite the shape of the continent, with the title “Africa rising”.

An article, headlined Africa’s hopeful economies: The sun shines bright, mentions that Nigerian cement tycoon Aliko Dangote has overtaken Oprah Winfrey as the richest black person in the world. The article goes on to describe how countries such as Ghana, Ethiopia and Mozambique are now among the fastest growing economies in the world and that a “genuine middle class is emerging”.

“Since The Economist regrettably labelled Africa ‘the hopeless continent’ a decade ago, a profound change has taken hold.”

While the magazine doesn’t shy away from the challenges still facing Africa, it says that the continent is likely to continue on its current growth path.