Companies in Africa are severely handicapped by poor power supply. 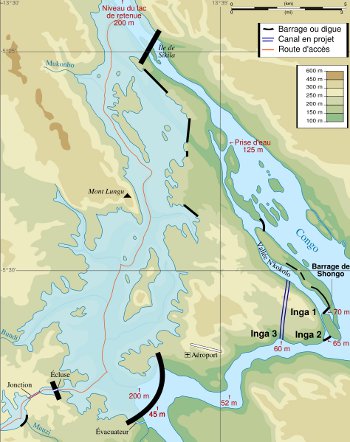 The location of the Grand Inga dam (lower centre), along with the other Inga Dams.

One project, the Inga dam hydropower scheme in the Democratic Republic of Congo (DRC) has the potential to dramatically change Central Africa’s energy supply situation. The site for the proposed dam is at the Inga Falls on the River Congo in western DRC.

At its annual meetings earlier this month, the African Development Bank (AfDB) held a special seminar entitled ‘The Inga hydroelectric development project’. “An exceptional site on the River Congo forms the world’s largest natural river basin. One day, from these banks could rise the world’s biggest dam . . . three times bigger than China’s Three Gorges Dam,” said the Bank in a specially produced video.

Two smaller power stations, Inga I and Inga II, are already in place. These have a generation capacity of 1,775 megawatts (MW), but are not operating at optimum levels. Plans are on the table to rehabilitate these.

It is, however, the Inga III and Grand Inga projects that hold the most potential. According to Reuters, the Inga III plant would have a generation capacity of between 4,300 and 5,000 MW, while the separate Grand Inga dam would generate 40,000 MW. It has been suggested that countries as far away as South Africa, Egypt and even Europe could use electricity from the Inga dams.

So where is the project currently standing? The AfDB says that a Franco-Canadian consortium is currently busy with a US$15 million study to examine the potential for developing the site in stages. “This is a major investment, and it won’t be possible to mobilise resources in one go. So we now are asking ourselves if we should develop Inga III, or an initial phase of the Grand Inga. The decision will of course be taken by the DRC government on the basis of the various technical and financial elements involved,” says Hela Cheikhrouhou, Director of Energy, Environment and Climate Change at the AfDB.

The study will also assess potential environmental and social risks.

Due to its sheer scale, funding for the project requires partnerships, bringing together a wide range of financial backers. The AfDB said that if the large-scale project is to go ahead, regional partners will also have to come onboard. Africa is divided into five regional energy pools.

Europe is also ready to participate, but they are seeking an efficient preparation stage. “We have to make sure that a certain number of criteria are respected. We look at the various technical, environmental, social and financial aspects of the projects we are being asked to finance,” notes Philippe Maystadt, president of the European Investment Bank.

According to reports, the DRC has been in talks with mining firm BHP Billiton to be an anchor customer for the Inga III facility after it expressed a desire to have an aluminium smelter supplied with electricity from the Congo River plant.

Access to energy is vitally important for employment creation and greater competitiveness in Africa. “If one day the Inga dam rises up the River Congo, the entire African economy will rise with it,” says the AfDB.