Rachel Tladi was 43 years old and working as an accountant when a client and friend challenged her to start her own construction company in South Africa. Under his mentorship, Tladi started Uvuko Civils, which was registered in 2002. 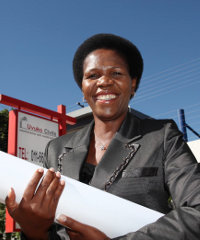 Uvuko Civils’ business is in building and construction and they have recently expanded the company, through a partnership with the Department of Public Works, to include repairs, maintenance and installations in the elevator industry.

Last week Tladi was one of the guest speakers at the launch of the inaugural WIE Africa (which stands for Women, Inspiration and Enterprise) symposium in Cape Town, and took a moment to tell How we made it in Africa a bit about what it is like to be a woman in a typically male-dominated industry.

“You find that men [often] do not respect women and men do not believe that women can do the right thing [in business],” said Tladi. “For argument’s sake… when you have an argument and say, ‘no this is the wrong measurement,’ then they argue. They don’t take you seriously and in most cases, even when you are going to get funding, there is always an obstacle for women.”

However, in spite of the fact that Tladi feels she has to prove her business worth to men in the industry, she recognises that it was a man that actually convinced her to start her company in the first place and, in fact, provided her company with its first business. “He said, ‘this is what I am going to do, I’m going to give you a job to do for me for R250,000 and I will fund and will do everything so that you are successful’. And he took me along,” reflected Tladi.

Tladi’s success in business has been recognised in a number of awards. In 2008 she was awarded the Govan Mbeki Best Woman Builder of the Year award at both the provincial and national level. The following year she received the Provincial Govan Mbeki Woman Contractor of the Year award and in 2010 she was the recipient of the Regional Business Woman Achievers Award in the entrepreneur category, and a finalist at the World Entrepreneur Awards 2010.

Tladi is a firm believer in supporting and mentoring other aspiring business women. “How I assist other women in business is that I do skills development… and then I also do motivational talks to motivate women to be in business.”

While Tladi does feel that she is often discriminated against by men in the industry for being a woman, she feels that it can also be a challenge to instruct and mentor other women. She added that the problem with women leaders is that they don’t only face prejudice from men, but also from women, and Tladi believes that this can be a real problem for the advancement of women leaders in society.

“So the challenge as well is that you can’t give women instructions,” said Tladi. “You know, they feel that another woman is giving them an instruction and you want to take them along with you… And when you mentor a woman, you tell them about all these things, you say ‘you know when you get your first cheque you can’t go and buy something, you need to put it back into the business,’ and they think that you want to control them.”

Tladi believes that maintaining integrity and developing one’s skills are the most powerful pieces of advice she can give to other women looking to be successful in the industry, and in business in general.

“My number one advice to these women is that they must have workshops; they must work together, and have motivational talks as woman. And as a successful person, it’s not final. I’m still in a race… So for them, they must just have courage, to push to go open the door that you can’t open. And for them to be successful, they must not be afraid to ask ‘how do we do this?’ The most important thing for a woman is to have skills for them to get into this industry,” she added. “It’s not an easy industry.”