The city of Nairobi generates over 2,800 metric tonnes of waste every day, 20% of it plastic. Many of it is dumped in the streets, creating ever larger areas of rubbish, blowing into peoples’ homes and yards and clogging drains, or is thrown into sprawling dumps on the city outskirts. Meanwhile, human settlement, land grabbing and illegal logging have reduced the area covered by forests to just 2% of Kenya’s total land mass. 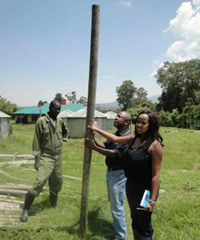 Lorna Rutto delivering fencing posts to a customer at his ranch outside Nairobi.

As a young child, Lorna Rutto was disturbed by the plastic waste littering the streets of her native Nairobi. As an adult, she has found a solution to the problem that is threatening to literally bury the city.

“The waste problem in Nairobi has reached dangerous levels. It is so bad that the United Nations Environment Programme has classified it as one of the worst humanitarian crises in the city,” says Rutto.

After leaving a career in finance, Rutto ventured into entrepreneurship with business partner, Charles Kalama, a biochemical engineer. For Rutto, the move has been extremely rewarding. “Each day when I go to work, I feel I am serving my purpose on this earth.” EcoPost removes tonnes of plastic waste from streets and landfills around Nairobi. The plastic is processed and transformed into fencing posts. “The posts provide an alternative to timber and thus prevent the cutting down of trees,” Rutto adds.

Kalama explains how the business began. “In 2008, we began searching for ways to create an integrated waste management solution for Nairobi, with a focus on unlocking and utilising the latent value of our municipal waste streams. At the time, we realised that, without adequate solutions, the waste challenge would continue to grow, based on the fact that with increased economic growth, we will generate more and more waste.”

Kalama says the idea for EcoPost was a simple one. “There is huge demand for long-lasting and environmentally friendly fencing posts, and waste plastic is hugely abundant and readily available. We aimed, first of all, to get a permanent solution to the plastic menace by using waste plastic to create value. Secondly, we wanted to provide an alternative material to timber and contribute to conserving our forests and water catchment areas, in addition to mitigating climate change.”

The process of manufacturing the posts is quite basic, says Kalama. “To manufacture our posts, we employ common plastic extrusion technology in a process called injection moulding. Shredded plastic pellets are gravity-fed into an extruder. This has a heated barrel, which melts the plastic, as a screw, driven by a motor, pushes the molten polymer forward and injects it into a mould. Whilst cooling and solidifying, the molten polymer takes the shape of the mould and, when removed, becomes a fencing post.”

Kalama expresses his pride in EcoPost’s impact, “Each month we use about 40 metric tonnes of plastic. That is plastic that otherwise would still be littering the environment.”

Around 200,000 timber posts are bought in and around Nairobi every month, indicating both the pressure on the Mau forest, Kenya’s largest indigenous forest, and the potential demand for plastic posts. As Rutto explains, “There is a high demand for posts to make fencing around the country’s houses, plantations and huge game reserves. For years, these were made from red cedar trees, which are now an endangered species, and a presidential directive has made it illegal to chop them down. Those looking for an alternative can bank on EcoPost, which recycles waste and helps the environment.”

Utilising dirty plastic to make a product that saves wood is not just an environmental plus; it boosts employment. To source its raw material, EcoPost hires hundreds of women who work as casual labour to collect the plastic from dumps and streets, and then sell it to EcoPost by the kilo.

In October 2011, Rutto was awarded the Cartier Women’s Initiative Award for sub-Saharan Africa, and received a prize of US$20,000 in seed money and a year of business coaching. Rutto says, “I have started using the funds to help women set up collection yards from which we will buy our raw material. We have also bought a truck, which has already boosted our capacity.”

Rutto hopes this will be the beginning of EcoPost’s expansion across Kenya and the greater Eastern African region. “We also intend [to make] products for various other uses, such as support beams and roofing trusses for the construction industry, as well as furniture, all of which are multi-million shilling industries in Kenya.”

Cécile Ney, coordinator of the Cartier Women’s Initiative Awards recalls Rutto’s successful participation; “The jury members were impressed by what this young lady had achieved in such a male-dominated field in a very short time. Also, the company seems viable as the products are highly innovative and the market is quite big, which will allow it to expand rapidly.”

This article was first published in Making It magazine