Terry Mungai is a renowned entrepreneur in Kenya’s beauty industry, running a chain of high-end salon and beauty shops, a training institute and a beauty pageant. She ventured into the industry in the 1990s after a purchasing a salon in Nairobi. 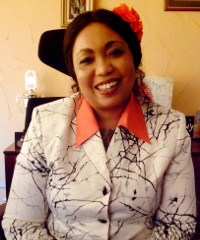 Mungai tells How we made it in Africa the salon was supposed to be a “side business” as she worked her way out of the corporate world and into self-employment. She had borrowed Ksh.800,000 (US$9,000) which she planned to repay in two years using both the salon’s income and her salary from working at a bank. But just two months later the bank went bust and employees were sent packing.

Although Mungai was retained to help collect the bank’s outstanding debt she still found herself stuck between a rock and a hard place. Other than money she had borrowed to buy the salon, she also had a house mortgage with years to run.

“In just two months my plans started crumbling pretty fast. Interest rates hit nearly 30% and it became obvious that I was not going to be able to keep my house. I had to sell it and pay off the outstanding debt,” Mungai recalls. And having a good job one day and being jobless the next motivated her to approach entrepreneurship seriously.

“That experience was motivation enough. I wanted to be in charge of my destiny.”

She decided to sell her salon to pay off more debts and moved to a better location in Nairobi where she started Ashleys beauty salon. She recalls when setting up her first outlet she ran out of money and even had to sell her car to complete the project.

“I did not have a choice because the salon was now going to be my livelihood. I figured I could always buy another car in future. Unlike the first time when I bought an existing business and had to continue using its name, this time around I had the opportunity to start something from scratch that could be associated with me. When we finally opened Ashleys, people really bought into the idea,” she says.

Mungai explains she started Ashleys to cater for career women.

“Having been a corporate lady myself I had visited lots of salons and could see there was a gap. There was nothing different, and attendants treated all customers the same way. I could see an opportunity to invest in a salon that treated the corporate woman differently, in a particular way, pampering her.”

“People don’t want to look for service, they want service to go to them.”

Mungai also holds the licence for the Miss World Kenya and has organised the beauty pageant for over a decade.

In addition she started Ashleys Hair and Beauty Academy, mostly out of her own frustrations with the industry. At the time there were only a handful of such beauty training centres in Nairobi. Many people did not consider beauty a professional career hence there was limited expertise in the industry. She would spend months training new staff because although many had some technical skill, they lacked confidence and would get intimidated by some customers. But ironically, as her staff became more confident and mastered customer service, other salons would poach them.

“What hurt me the most is that I was investing in training my people and other salons would be waiting ready to poach them. This frustrated me for two years then I realised people respected the training I was giving. It occurred to me that if I trained people for a fee I would gladly let them go (after training) to create room for other students. We have now trained more than 7,000 people.

“It is now a career of choice. People come in to get a diploma in cosmetology because they have a passion for beauty, not because they do not have other career options.”

Taking on a man’s world

Mungai has now ventured into property development through Temus Holdings. The company has completed its first development, a Ksh. 210m ($2.4m) project of 32 units comprising two and three-bedroom apartments, and is set to embark on its second venture.

“I have run service-oriented companies which are good at creating employment. However, I couldn’t really say that I now had enough for my retirement. In this business you can manage a big turnover but by the time you are finished with your overheads, you are left with just about 5% or 10%. We have always had to borrow to open new outlets because we wanted to remain relevant.

“So I knew this would not give me a decent retirement.”

Mungai “thrives on challenges” and was thrilled by the idea of taking on the property industry, traditionally perceived to be “a man’s world”. But she also believes that success has no gender.

Although a rise in interest rates affected the expected outcome of her first real estate project, she is determined to give it another shot.

“I am a risk taker and more importantly my faith in God propels me. I work hard and I give it my best. I don’t believe in failure.”