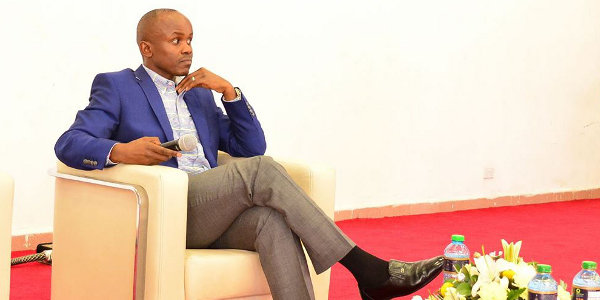 When James Mworia joined Nairobi-based investment company Centum in 2001 as a 23-year-old intern, his ambition was to “become CEO someday”. His job then was to file documents, but seven years later he was indeed appointed CEO, becoming one of the youngest senior executives in a Kenyan listed firm.

Mworia has now led Centum for seven years, and is credited with transforming the business, which was established in 1967. Centum has investments in a variety of sectors, including energy, real estate, financial services and fast-moving consumer goods.

Speaking to a group of young professionals and entrepreneurs in Nairobi, Mworia (now 37), credited his rise in corporate Kenya to humility and a hunger for personal development.

“In my experience the highest return on capital and time is investment in yourself,” says Mworia.

His curiosity and a “desire to be better” is what made him take up the internship position despite being overqualified. He already had a law degree, a Certified Public Accountant (CPA) title and was working towards a Chartered Institute of Management Accountants (CIMA) qualification.

“I was a qualified person, but you have to have that humility to… learn something. You must have that hunger to improve yourself,” says Mworia.

As a junior staffer, he would finish his own duties early in the day and offer to help his colleagues finish their tasks.

“It is because in doing, you learn,” Mworia explains. “I see many young people who have an opportunity but think because they are being paid Ksh.5,000 (US$48) they should give work worth Ksh.5,000. They come to work at 9am and leave at 4pm. They don’t wear a tie, they are never smart. What you are paid is immaterial. You should offer a [high level of] service not because of what you are paid – but because you stand for excellence.”

Mworia’s willingness to dream big has also served him well in his career. When the company CEO left and the position was advertised, Mworia studied the job requirements and mapped out what he needed to do to qualify. “What I was aiming for was to get ready – so that next time an opportunity presented itself I’d be ready to take it.”

In the meantime he climbed the ladder to become investment manager but after two years in the post he quit because he felt Centum was “very conservative”, and joined infrastructure-focused investment company TransCentury.

“I could have stayed and earned a good salary not doing much. But as a philosophy, I am more interested in the value I add.”

About 18 months later the Centum management asked Mworia to come back but he was not keen, again because he felt the company was “not doing much”. So the board asked him what he would do different?

He put together a strategic plan and presented it to them two weeks later. His goal was to grow Centum several times larger than it had progressed in 40 years. They saw his vision and hired him as CEO to execute the ambitious plan that has seen Centum expand its sector-focus, geographical reach and financial value.

Mworia adds he is never afraid to dream big, after all “dreaming is free”, but warns “if you set yourself only small goals do not be surprised if you actually achieve them”.

But success takes more than just grand dreams, and he notes many youth see the “glory” of big positions and wealth, but don’t acknowledge the amount of effort that goes into creating that success.

According to Mworia, many people fail to recognise their true worth. When negotiating his pay package, Mworia says he looked at the value he would create at Centum.

“This is where people usually tell how they have gone to school and so forth. I told [the board] what I am interested in is to create value – and get a share of the value. If at the end of the year I have not added value, please invoice me what you have paid me for the year,” says Mworia. Today he is the fourth largest individual shareholder in Centum with 0.61% of the multi-billion shilling empire.

“Success is not what you have taken from others. It is a function of the value that you have added and the greater that value-add, the bigger the slice you get.”