Tabitha Mukami Karanja chats with her senior managers in her spacious office in Naivasha, 70km west of Kenya’s capital, Nairobi. Behind her stands a chest of drawers stacked with green and brown bottles bearing the labels of her company’s liquor brands. Against another wall is a wooden cabinet with files and several trophies. 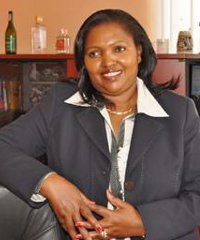 The soft-spoken Karanja is the founder and CEO of Keroche Breweries, Kenya’s first locally owned beer manufacturer. Despite her calm demeanour, Karanja is unrelenting in her quest to expand Keroche’s share of Kenya’s lucrative liquor trade beyond its current 5%. Her target is to command a 30% share within a decade, she says.

Karanja’s story is a classic David and Goliath tale. The company, which she founded in 1989, was the first local firm to challenge East African Breweries Limited (EABL), the powerful company that has dominated the Kenyan alcohol trade for 92 years. UK-based Diageo now controls EABL, which started out as Kenya Breweries, founded by the British Hurst brothers in 1922. With its flagship Tusker beer, Johnnie Walker whisky and Snapp apple-flavoured alcoholic drink, EABL commands 90% of the liquor market, but Keroche is making inroads, especially outside Nairobi, where Karanja markets her brands aggressively.

Karanja’s story began in 1965, when she was born to middle class parents in Kijabe, 41km west of Naivasha. She was the first of 10 children, a role that prepared Karanja for her future leadership responsibilities. “I played a key role in bringing up my siblings,” she boasts. “I walked from one class to another just to know how they performed.”

After finishing high school, she worked for three years as an assistant librarian in the tourism ministry. In 1987, at the age of 22, she earned a diploma in business management at the University of Nairobi. Two years later she married Joseph Karanja, who ran a hardware shop in Naivasha. Together they opened a small alcohol factory in 1992 that specialised in fortified wine – wine with an added distilled spirit, usually brandy.

When the winery started making profits, Karanja stepped forward to be the face of the business, trusting her ability and resilience in the high-margin industry. She named the business Keroche in honour of her father-in-law, Karanja Mwangi, whose friends call him “Keroche”.

The new business faced a challenge in 1993, when banks refused to advance it capital to expand, she says. This is relatively typical in Kenya. Formal financial institutions have extended credit to fewer than 20% of small to medium-sized enterprises in the country, according to FSD Kenya, an independent trust established to support the development of financial markets.

Like many other small business owners in her position, Karanja turned to her family for help. She does not disclose the exact sum, but she speaks of having mobilised “little family resources”.

Her next challenge was exorbitant taxation. Between 1992 and 2006, Karanja says, taxes on bottled alcohol products in Kenya rose by nearly 300%. This harsh taxation reduced formal alcohol consumption in Kenya from 400m litres in 1991 to 200m litres by 2006, according to an internal survey by Keroche – a situation that dried up some of the fledgling brewer’s profit margins.

Then the brewer’s Keroche and Viena fortified wines started gaining popularity in 1997 and exposed the businesswoman to further headaches: in 2003 the Kenya Revenue Authority (KRA) accused her of withholding KSh. 1bn (US$11m) in taxes. Karanja denied this. The stand-off dragged on until 2006, when the KRA ordered Keroche to pay up within two weeks or face closure. Karanja stood firm, sued the KRA and won.

Taxes were not only too high, they were unfair, she says. In Kenya’s 2006-2007 budget, the finance minister did not levy a value-added tax on EABL’s Senator beer, but doubled the tax on fortified wines, which were Keroche’s mainstay. This made the ground uneven, Karanja says.