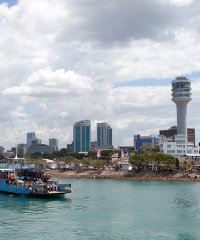 Dar es Salaam faces enormous challenges in the areas of waste and sanitation, with few policies in place and demand far outstripping supply.

The study, which was conducted by the Economist Intelligence Unit, examines the environmental performance of 15 African cities in eight categories: energy and CO2, land use, transport, waste, water, sanitation, air quality and environmental governance.

“None of the 15 cities in the index placed in the highest possible band of ‘well above average’, suggesting that even the best performing cities in the continent have room to improve their environmental footprint,” notes the report.

The “greenest” urban areas on the continent are mainly cities from South Africa and the North Africa region. Ghana’s capital Accra, is the only sub-Saharan African city (excluding South Africa) in the “above average” category.

The two African cities facing the most severe challenges are Tanzania’s commercial hub, Dar es Salaam, and Mozambique’s capital, Maputo. Dar, for example, has significant environmental problems, most notably in the areas of waste and sanitation. “In the absence of regular waste collection, many residents simply burn their waste,” notes the report.

Among the 15 African cities included in the index, the average percentage of residents living in informal settlements is nearly 40%. However, looking at the cities individually, this figure varies greatly – from 15% in Casablanca to 70% in Maputo.

The index highlights a strong correlation between a city’s environmental performance and the percentage of the population residing in informal settlements. The fewer residents living informally, the better the city performs.

The impact of wealth

The report says that although greater wealth often leads to improved environmental performance, this is not always the case. In developing countries, rising levels of wealth is not necessarily a cure-all to environmental problems. In fact, it can lead to greater sustainability challenges, especially with regard to resource consumption.

“The notion that you can grow your way from poverty to greenness is questionable,” says Anton Cartwright, an economist at the African Centre for Cities. “Wealth does make the provision of formal water and sanitation services affordable, but this is a small proportion of greenness. For the rest, in Africa, more affluence currently correlates with more emissions, more urban sprawl, lower density, more cars”.

In many sub-Saharan African cities the focus is more on human health and poverty reduction, the so-called “brown agenda”, than on developing sustainable ecosystems, or the “green agenda”.

“One reason why environmental issues are often not prioritised by political elites is that, by definition, sustainability is a long-term issue, requiring investment now for longer-term benefit in a resource constrained environment,” says Prof David Simon, an expert on urban sustainability in Africa. “If you have a queue outside your office with people struggling to meet basic needs of food, shelter and water, those sorts of immediate priorities trump longer-term ones.”

The report, however, notes that the “effects of climate on Africa – from impacts on crop production to natural disasters – could be devastating in the long-term, and the challenge will be to find the right balance between addressing immediate and longer-term problems.”