Seven years ago Kenyan Heshan de Silva’s parents gave him KSh. 10,000 (US$116) which he used as capital to start his first business. 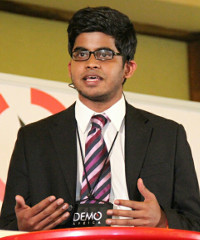 De Silva, who was 18 at the time, started a company which bundled insurance cover with long distance bus tickets. By the end of the year, the business had made KSh. 90m (US$1.05m).

He then embarked on his next venture, that of investing in innovative ideas. Today De Silva runs VenCap Kenya, a venture capital firm that is invested in 22,000 people and has created 17,000 businesses across the world. The fund is part of The De Silva Group.

VenCap Kenya invests an average of $10,000-$15,000 into innovative ideas and offers its investees support in executing the ideas. So far, the businesses created by VenCap and its investees employ about 70,000 people.

De Silva told How we made it in Africa that creating jobs and reducing poverty is a major goal for the group.

“When we started this we didn’t want to be the Abraajs of this continent that do five deals a year and they are happy. We wanted to impact people on a large scale. The mandate of our group is to reduce poverty from 60% to 40% in this country within five years. We can’t do that with five deals a year.”

According to the 25-year-old entrepreneur, VenCap has had a 70% success rate, with three of its companies crossing the $10m valuation mark. One of its businesses is an advertising company that offers GPS-enabled advertising on public transport vehicles for KSh. 150 ($1.74) and whose model has been patented in dozens of countries worldwide.

Another successful business is The Gourmet Nomads, which distributes more than 1,000 lunches to businesses in Nairobi every day for KSh. 150 ($1.74) per meal. Offering affordable services, be it in advertising or packed lunches, De Silva says, is important because it appeals to a wider range of customers.

“I never take a majority stake in a business… usually around 25%-35% and that’s it. Even if we are financing an idea completely, we will never cross 40% ownership,” he says, adding that “trust is everything in our line of work”.

“The really nice thing about it is that we are not looking for the next big thing. We are not looking for huge businesses. We are targeting the poorest people in this country. These are people who make $2 or less a day. They are not having massive dreams of owning [a five star hotel]. So if it’s just a need in your street, or neighbourhood… and you create a business that can employ three or four people and make money at the end of the month, that is gold for us.”

De Silva enjoys being involved in a wide range of sectors. “Because of my ADD (attention deficit disorder), it is so handy that I am invested in so many things. I can be talking about the robotics we are invested in and switch to a green house then to a road that we are building. How can you ever get tired when you have got a clothing line in Miami and another in Kenya? It’s a lot of fun. I love what I do.”