Shannon May is one of the co-founders of Bridge International Academics (BIA), a network of primary schools in Kenya that aim to provide quality education at US$4-5 a month, using their ‘school in a box’ model.  Last week BIA was announced the winner of the 2012 Africa Awards for Entrepreneurship in the Outstanding Small and Growing business category. 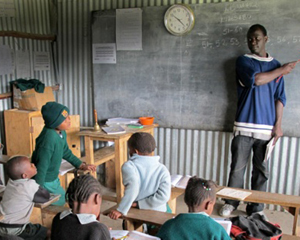 One of BIA's classrooms.

BIA has grown from one academy with 60 pupils to 83 academies and 26,000 pupils in three and a half years. May tells How we made it in Africa’s Kate Douglas about how BIA is educating Africa’s children, while building a profitable business.

Kenya faces two challenges in educating its children. There simply aren’t enough public schools, and many of the schools that they do have, are failing to provide the pupils with good education. According to education research centre Uwezo, two out of three pupils in Standard 3 across East Africa are not able to pass basic tests in English, Kiswahili or numeracy at the Standard 2 level. By the time they reach Standard 7, two in 10 pupils still do not have Standard 2 level competencies. This is the reality that parents are facing. What parents need is to find a real education for their child – not just a series of buildings called a school, or a person who claims the title ‘teacher’, or a room with a ton of books. Parents need to find a place where their children will not only learn, but also receive a globally competitive education and at a cost that they can afford. That is what we do at BIA.

For $5 a month or less, we provide children with an education that is going to change their lives. We don’t make that claim lightly. Using international exams, after 12 months at a Bridge International Academy, a child shows 80-150% improvement over a child who attended a public school in all core reading competencies. Once a child can read, the world of knowledge is open to them. We can make this significant change in a child’s learning in one year. Imagine what we can do if we are able to educate that child for all eight years of primary school, or 11 years if she starts in pre-school with us?

BIA opened 10 schools in its first two years, where did your start-up financing come from?

Like most start-ups, the initial financing is self-financing. You have to be willing to start working without pay for a while, or a long while. Then you have to be willing to sell yourself and your idea to everyone you know. You can’t be bashful, and you can’t give up when almost everyone says no. One of our co-founders [Jay Kimmelman] had a previous start-up that was a success, so fewer people said no – since at least one of us had a track record of not losing everyone’s money. But still it took a long time. Starting what would be the largest private education system in the world, for the poor, in emerging markets, is not the easiest thing to sell to an investor. Or at least it wasn’t when we started in 2008. But due to Jay’s previous experience, we were able to get more than a handful of angel investors to jumpstart our financing. Then, in 2009 Omidyar Network came into the lead, and closed our Series A, investing $1.8 million. Since then, Omidyar Network has participated in each of our subsequent financing rounds, of which there have been two. Learn Capital, an education venture capital firm, led our Series B. New Enterprise Associates (NEA), one of the largest venture capital firms globally, led our Series C, which we closed in the first quarter of 2012.

Integral to our entire business model – both financial and educational – is scale. We were not the first people to own and operate a private school targeted to serve the poor. There are thousands of such existing schools in Kenya. There are more than 12,000 in Lagos alone. The most conservative accounts estimate 75,000 such schools in India; others confirm the existence of 300,000. Almost all of these schools are sole proprietorships, or small ‘mom and pops’. This business structure limits each of these institutions from achieving what we have set as our goal: to be a world-class education institution that delivers world-competitive education to families living in poverty. It is true that if a school is a stand-alone business, all of its revenues must come from the single population of its matriculated students, paying fees. Consequently the level of investment that is financially possible in the school is directly proportional to the fees parents pay. Also as a single institution, serving a small and difficult to serve population, it is difficult for these schools to raise capital for investment and expansion. Nor do they have the sophistication, network, or resources to access research-based best practices in education, or to hire leading experts in curriculum development to write lessons and textbooks specifically for their pupils. We can. This was always the plan: heavily invest upfront in the best education system that $4-5 a month can provide, given that 1,000,000 children pay that $4-5 per month. If you try to compare what we deliver in the classroom versus another low-cost private school charging the same amount, the differences are stark. We have desks; they may not. We have textbooks designed specifically for our pupils, for our curriculum; they do not have textbooks. We have hands-on materials for the pupils to use, including building blocks, counters, slates; they do not.