Tanzanian social entrepreneur David Mwendele was born into a poor family, lived on the streets when his parents separated and was eventually taken in by an orphanage and sponsored to go to school. 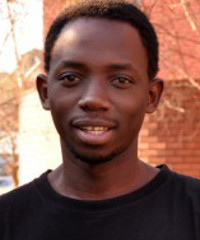 David Mwendele, founder of charity Let God be You Foundation

When he completed his studies, Mwendele felt frustrated seeing other young people experience the adversities he had faced. Most young people in his community on the outskirts of Dar es Salaam struggle to find jobs because they do not have an education and lack skills.

“I was very frustrated seeing fellow youth who were not lucky enough to get an education suffering. I was in that situation before I was taken in by the orphanage and offered education. I really wanted to do something to support my community,” he says.

“After a very short run it became very difficult to fund my project. I decided to start a business that would help raise funds for the charity,” says Mwendele. “I started a printing business in Dar es Salaam. I taught four of my students how to do printing and how to make hard cover exercise books. We would go to churches, mosques and other places where large numbers of people frequent to sell the school books.”

Mwendele had acquired skills in paper making while working in a factory during his teenage years. The venture, which now includes the production of receipt books and notebooks, led to the birth of the LGBY Social Enterprise, the profit making arm of the foundation which finances its activities.

In 2012 Mwendele was named an Anzisha Prize finalist. The Anzisha Prize is the continent’s premier award for entrepreneurs between the ages of 15 and 22 years who have started and are actively running innovative social ventures or for-profit businesses with potential.

In addition to over US$75,000 in cash prizes up for grabs, 12 finalists of the Anzisha Prize will win an all-expenses paid trip to South Africa to be a part of a week-long entrepreneurship workshop and conference at the prestigious African Leadership Academy in Johannesburg.

The serial entrepreneur used the US$2,000 cash prize from the Anzisha Prize to diversify the firm’s interest to include an internet café and LGBY Media, a company that specialises in video and TV production, graphics design, photography and making documentaries. He used the money to purchase equipment for the internet café, which offers training to local youth and services such as printing and photocopying.

The foundation which started its operations in a church has since moved to larger space and has taught more than 140 young people computer, embroidery, T-shirt printing, baking and photography skills.

“Some of the youth we have trained have started their own businesses and others have gained employment or gone back to school to further their studies,” says Mwendele.

He explains that the advice, mentorship and networks he has built as an Anzisha Prize fellow have helped him to take up new opportunities to ensure sustainability and greater impact in his community.

“The opportunity to meet fellow youth who are doing great things to improve lives in their communities is very inspiring. For instance, I ventured into video production after another Anzisha fellow taught me a few things and I got motivated to start.”

A major challenge Mwendele faces is getting people to understand his approach to business.

“They really don’t understand social entrepreneurship. Last year I presented my idea to three banks and they were interested to finance me but when they saw the charity bit in it they pulled out.

“I was raised in a poor family, I lived on the street begging for money and I was later taken to school by strangers who gave me food and other basic needs. That had a profound effect on my life and how I view things. I really want to do business. I want to succeed in life, but I want to make sure I use my money, my time and my skills to serve my community.”

Mwendele urges other youth not to allow the “lack of money be an obstacle” to them attaining their goals.

“Don’t focus on money. Focus on the idea you have and use the resources within your community whether it is from parents, siblings or neighbours,” he says. “When you are young and you do great stuff people are more likely to acknowledge your efforts and offer you support.”