In an article originally written for UNIDO’s Making It magazine, Olivier Nyirubugara investigates how a self-initiated microcredit system is boosting women’s business opportunities. 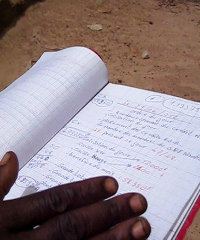 Women in south-western Burkina Faso have engaged in informal but prosperous trade in the last couple of years thanks to capital they raised and then fructified in the form of self-initiated, self-run microcredit. Since the introduction of the concept of microcredit in Bangladesh by Professor Muhammad Yunus and the Grameen Bank, this path has frequently been suggested as one of the most effective cures for poverty. The suggested model implies a financial institution, generally a bank, which determines the rules of the game that the applicants need to comply with in order to have access to microcredit. However women in and around the town of Léo, some 160 km southwest of the capital, Ouagadougou, have developed an alternative, bank-less system whereby capital comes from, and returns to, the beneficiaries themselves.

Napo Safara, a mother of two, is a member of the 48-shea-collecting-woman association of Nankouloubou in Léo. Like the rest of the women, every year between June and December, she is busy collecting and then processing shea nuts. The first six months of the next year, she sells soap at the Friday central market in Leo, sometimes together with her 16-year-old daughter.

Shea nuts are an exceptional gift from nature. They fall by themselves when they are ripe, and the trees that bear them grow by themselves in the wilderness, having resisted all organised planting initiatives. Local tradition forbids boys and men from engaging in shea nut collecting, leaving that juicy income-generating activity exclusively to girls and women. The Nankouloubou association women have taken advantage of this situation and set up a system to further increase and diversify their sources of income.

“I received a 50,000 Francs cfa (€80) loan, to which I added some more money to have a start-up capital,” Safara told me in June 2012, as she was selling her soaps. She had secured that loan from her association in February, and had paid it back in March with 10% interest.

Unlike Safara, who focused just on soap selling, Nébié Biata has engaged in a series of businesses. With a €91 credit in February, she started a firewood business. With the March credit amounting to €115, she started a cooking pot business. Both businesses appear to be self-sustained, as they not only allowed her to pay back both the loans and the interests, but also to provide for her, not-yet-married, children, and even to offer gifts to the children of those who had married.

The members of the Nankouloubou shea nut-collecting-women’s association meet every month not only to pay their contributions or reimburse their loans, but also to collect new microcredits.

“We count the amount collected that month and redistribute it immediately and entirely to those willing to secure microcredits,” Diasso Yago Alimata, a member of the association said. She added that when some money is left, someone has to take it as a loan. She once volunteered and took 15,000 francs cfa (€23), with which she purchased groundnuts.

“We have no bank account for this fund,” Idayatou added, saying that she takes good note of who contributes, who pays back the loan, and who secures a new credit.