Banana farmers in Kenya often find themselves incurring huge losses due to surplus fruit that basically ends up rotting away. Smallholder farmers in remote areas face challenges in reaching markets for their produce because of bad roads and a lack of information. 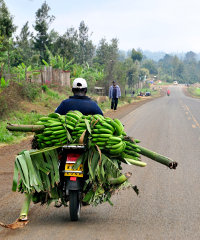 In a bid to reduce post-harvest losses, Eric Muthomi – a 26 year old entrepreneur – started Stawi Foods and Fruits, an award winning enterprise involved in the production of banana flour. The company works with a team of banana farmers in the agricultural town of Meru in central Kenya. The idea to process raw bananas into flour was conceived in 2010 following Muthomi’s consultations with Kenya’s ministry of agriculture.

“I was looking for ways of providing a market for small-scale farmers and increasing the shelf life of bananas, which would rot in farms, especially those belonging to farmers who could not reach the collection centres set up along the tarmac road on market days,” says Muthomi.

The company’s main product is banana flour made from processed green bananas. The banana flour is gluten free, nutritious and can be used to make baby food, porridge, mashed food, baked foods and soups.

Bananas are sourced from small-scale farmers in Meru and processed using both manual labour and processing equipment to make the flour. Muthomi works with a team of four full-time employees and 15 casual workers.

“We are working with a group of 100 farmers. As we scale we will need additional farmers to meet the demand for more raw materials. Farmers benefit by earning more income. They also have a ready market for their produce and do not have to incur additional costs of transportation to Nairobi,” says Muthomi.

Traditionally banana farmers in Meru had to drop off their produce at designated collection points for transport to Nairobi. Since farmers do not have direct access to consumers they sell to middlemen at throw-away prices. The perishable nature of bananas and logistical challenges give middlemen the bargaining power over farmers.

Stawi banana flour is distributed in major supermarkets like Nakumatt, Uchumi and Chandarana across the country.

Some of the challenges Muthomi has faced have been accessing start-up capital, lengthy licensing procedures, and complying with the many regulations that businesses dealing with food have to adhere to. The company also has to invest heavily in marketing and raise awareness about the benefits of banana flour given that most consumers are used to maize and wheat flour.

“The food processing industry is critical in providing a market for farm produce, creating employment and curbing rural-urban migration. Value addition promotes the export of finished goods rather than raw materials and earns the country more foreign exchange,” says Muthomi.