Creative thinking is the lifeblood of our time. Our futures will be defined by how well we unleash and exploit our creativity. Nowhere is this more apt than on the continent of Africa. In recent years Africa’s economic growth has been driven by extracting energy or minerals. Looking ahead, the challenge will be to mine minds, to release the greatest natural resource of all, Africa’s creativity. 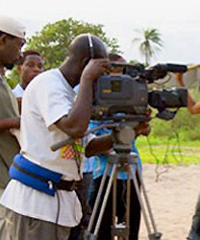 Film industries across the continent have created a market worth millions.

The “creative economy” often seems a nebulous concept compared to more traditional industries. After all we can easily define a product like a motor car and it is not too difficult to count them as they come off a production line. Measuring a sector that covers everything from fashion to film, software to soft furnishings or advertising to app design is more complex. But even if definitions vary, the global creative economy is still measured in hundreds of billions or even trillions of dollars annually and all the sources agree, it is growing year on year.

The United Nations (UN) goes further and points to a range of non-monetary social and development benefits from the creative economy. A series of studies commissioned by UNESCO and UNDO have shown that creative industries can drive the very best types of development that are inclusive for women, indigenous peoples and youth. The UN argues that creative expressions empowers individuals and groups and creates well-being in all societies. In other words, we all benefit from a strong creative economy, even if we are not directly involved ourselves. To this end, the promotion of culture and creativity has earned its place in the new post-2015 global development agenda.

So how does this all relate to Africa? Firstly, all over the continent there are signs of a vibrant creative sector. Booming film industries, for example, Nollywood in Nigeria, Dar es Salaam’s Bongo films and Uganda’s Ugawood have created a market worth millions and employment for tens of thousands. Using streaming technology they have also built an export market, distributing their films to diaspora communities around the globe. Besides making money, these films have entertained many and created an entirely indigenous showbiz industry.

Elsewhere, only this month, a Kenyan company, Well Told Story, won its second International Emmy, one of the most prestigious awards in the global creative industries. The Digital Emmy recognised the company’s ground-breaking multi-platform work with Shujaaz, a story-based informal learning project for young people in Kenya. Its combines cartoons, FM radio, video and social media and has already reached millions.

I could just as easily mention the waves being made by West African fashion designers, the thriving North African festival circuit, or the technology incubators and hubs up and down the continent that are using African creativity to solve African problems. But for me the most positive indicators of Africa’s creative future are on a micro scale and that are everywhere. Yes, everywhere – on an urban street corner, or in a remote village – people solves problems in creative ways, entrepreneurs spot new opportunities, communities collaborate to make things better. These exhibit the practical everyday creativity that is the bedrock of a successful creative economy.

So has Africa something it can share with the rest of the world? Building “creation spaces” is one of the hot topics of the moment. All over the globe governments, corporations and academics are looking at how we can better encourage ideas and creativity. To foster the best ideas, we need to create environments where emotional responses, rich experiences and social learnings are at the forefront.

That sounds a lot like a traditional African community. Jay Cross, the man who originally coined the term “eLearning” and a leading thinker on how we learn, agrees and says Africa has something precious. “Africa should probably worry more about not destroying the creation spaces it already has than about creating new ones.”

Educators need to consider whether they are allowing their learners to develop creative thinking skills. The question of whether you can “teach” creativity is a vexed one, Cross says. “Maybe so, maybe not, but creativity can certainly be nurtured. Giving people the freedom to think broadly, providing examples of the creativity of others, encouraging innovation and experimentation, all these stoke our creative fires.” And he argues that the conventional school is not achieving it. “John Medina, author of Brain Rules, has written that if you set out to design an environment that stifles learning and creativity, you’d end up with something like the modern western classroom: a closed box, cut off from the outdoors and lined with rows of chairs.”

The virtual world offers unlimited space for sharing, comparing, inspiration and support, indeed all the tools for creativity. Wonderful ideas and products are coming out of Africa’s creative industries – software, apps and innovative ways of learning. We need to think how we can build new creation spaces, blending the African spark with the freedom and opportunities of the digital universe.

Adam Salkeld is a Zanzibar-based columnist and television producer.

This article is a chapter from The eLearning Africa Report 2014.