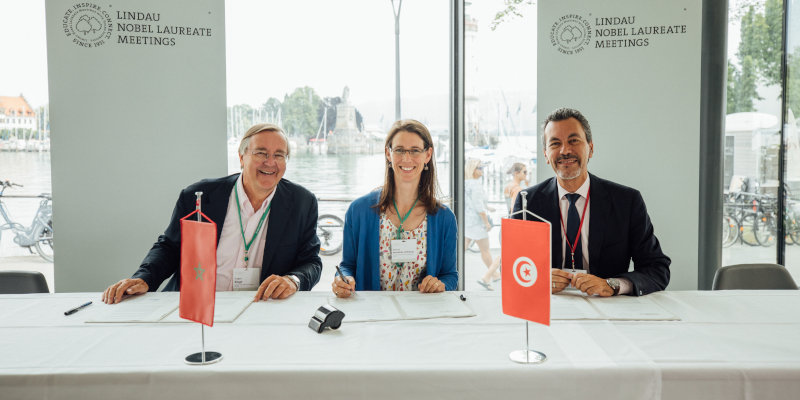 During the 69th Lindau Nobel Laureate Meeting, the Council and Foundation for the Lindau Nobel Laureate Meetings have signed a Memorandum of Understanding (MoU) with Honoris United Universities, the first private pan-African higher education network, to increase participation and to promote research in natural sciences and economics across Africa.

Since its foundation in 1951, around 400 Nobel Laureates have attended the Lindau Nobel Laureate Meetings, which are held each year as a forum for scientists of different generations, cultures and disciplines to convene and exchange knowledge, ideas and experiences. The theme is alternated each year and is based on the three natural science Nobel Prize disciplines – physiology & medicine, physics and chemistry. An interdisciplinary meeting based around all three natural sciences is held every five years and a Lindau Meeting on economic sciences is held every three years.

The MoU builds upon the institutions’ shared interest in supporting science capacity building and is designed to encourage regular participation of natural science and economics students from member institutions of the Honoris network. CEO of Honoris United Universities, Luis Lopez, said, “As we mark our second anniversary, this memorandum reflects Honoris’ increasing impact as a continent-wide educator and our growing international reputation for developing and promoting world-class African human capital. As an Academic Partner to the Lindau Nobel Laureate Meetings, Honoris’ researchers and doctors will have a unique opportunity to collaborate alongside the next generations of global leaders. This is a milestone that reinforces our academic excellence.”

As part of the MoU, Honoris and the Council and Foundation will rigorously select a delegation of students and postgraduates in science and economics from member institutions in Africa to attend future Lindau Nobel Laureate Meetings, including the 70th edition that will cover all themes, due to take place in 2020.

“Africa is such a dynamic continent with so many promising young scientists. The Lindau Meetings are proud to foster the participation of African scientists for several years now. I am thus deeply grateful for the partnership with Honoris United Universities as it means a cornerstone in this important effort”, says Countess Bettina Bernadotte, President of the Council for the Lindau Nobel Laureate Meetings.