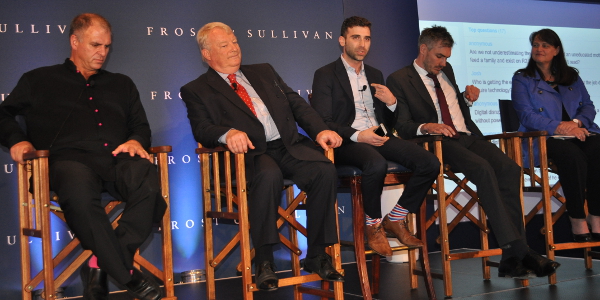 The digital revolution has often been cited as the silver bullet to eradicate poverty.

A report by McKinsey, published in 2013, estimated there will be up to three billion more people with access to the internet in 2025, and this rapid rise in connectivity could be a key driver of development in poor communities.

In Africa, more affordable mobile phones and improving access to the internet has resulted in innovative solutions to common challenges. One clear success is Safaricom’s mobile banking service M-Pesa in Kenya, which addresses the needs of the majority unbanked population. Today, over 70% of Kenyans use the service to make payments and transfer money.

Technological advancement is also believed to enable entrepreneurship and unlock business opportunities. For example, farmers with internet-enabled phones can better track market prices and weather forecasts to improve crop yields and profits. And the continent is full of tech start-ups who are using digital innovations to solve problems, grow businesses and better the lives of people.

However, Louise van Rhyn, founder of Symphonia for South Africa, argues that Africa will not be able to truly take advantage of a digital revolution unless education is improved.

“If you cannot read it’s very hard to benefit from any of it,” said Van Rhyn during a panel discussion at Frost & Sullivan’s annual congress in Cape Town earlier today.

In May, two reports released by Stellenbosch University’s Research on Socioeconomic Policy Group stated around 60% of South African children could not read at even a basic level by the end of Grade 4.

“So we worry this is going to create a digital divide,” continued Van Rhyn.

“Technology enables… but people make things happen and we are not paying enough attention to what the people need to make this happen – specifically most of our children, who will not be able to benefit from any of this simply because they cannot read.”

Nico Czypionka, chairman of the Special Economic Zones Authority in Botswana, agreed, adding that high illiteracy levels means many struggle to benefit from a computer, the internet or even an ATM.

“So we need to start with [improving] basic education. It has to start at kindergarten and primary education.”

However, Jonathan Ayache, Uber’s general manager in South Africa, said technology could actually improve access to education. The onset of e-learning platforms, such as Harvard’s online courses, has brought down many of the barriers to education.

“I think there is a massive opportunity there. My little sister could use [a smartphone or tablet] before she could read,” he highlighted.

“One of our problems is we do not have enough teachers or they do not have the skill set we need, but there are plenty of people that do have the right skill set and we need to now connect them [to these students].”