As an estimated 3.5 million people face starvation in Kenya due to the worst drought in the past six decades, the debate on whether or not genetically modified (GM) foods will solve the country’s perennial food shortage rages on. Even as the government advocates for the commercialisation of GM crops, some stakeholders are writing this off arguing that the crops will pose security threats among consumers, will be costly and might not necessarily guarantee food security. 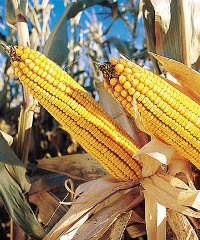 GM crops is a controversial topic in Kenya.

The Kenya Agricultural Research Institute (KARI), a government research body, has been conducting trials of Bt cotton (genetically modified cotton seeds) across the country. According to Christopher Ngichabe, the assistant director of biotechnology and biodiversity conservation at KARI, this has set the ball rolling with the eventual commercialisation of Bt cotton expected by 2015. One farmer Su Kahumba is not particularly excited by this news. She argues that Kenya should learn from the failures of farmers in other countries who tried to adopt GM technology.

“Genetically modified organisms (GMOs) are simply a cash cow creation of products, seed and inputs that will produce in soils that have been damaged by industrial agriculture. . . The foreseeable outcome is simply increased costs of production until they are non-affordable. I don’t understand why we are not prepared to learn from others’ failings. There is too much money and greed involved at the top level,” warns Kahumba.

Andy Watt, managing director and region head of Syngenta East Africa Limited, on the other hand argues that GM seeds deliver benefits such as drought tolerance and improved nutrition and as such will be important in future agricultural growing systems. Syngenta manufacturers farm inputs, among them GM seeds.

“GMOs are likely to form a part of Kenya’s cropping solutions in the future but will not solve all the food shortage problems. We have to improve overall agricultural productivity through the use of improved seeds, better utilisation of fertiliser and crop protection, improved farming techniques and making water available for agricultural use,” said Watt.

Kahumba reckons that although stemming the current starvation is an absolute priority, Kenya needs a long-term strategic plan. Organic farming, she says, is the answer to food security. “Food comes from soils, not supermarkets. So whilst dealing with the current crisis, we should not lose sight of the long-term solutions. Organic farmers produce for up to three months longer than conventional farmers, even during the drought, as their soils are more resilient to stress.”

She adds: “Organic agriculture supports natural biology, resulting in balanced ecosystems within and above the soils, which then create sustainability on agricultural output. Organic agriculture results too in safer foods. Recent studies have also shown that organic production results in higher yields than conventional agriculture, in some cases by 79%.”

Though Kahumba is of the opinion that Kenya does not have adequate personnel and capacity to properly execute commercialisation of GM technology, Watt is of a different opinion. “The regulatory and technical bodies in Kenya such as the Kenya Plant Health Inspectorate Services (KEPHIS) and KARI are well developed and well equipped to conduct high quality research and assure regulation to international standards,” said Watt.

Most of them chose maize as their preferred crop for GM commercialisation, demonstrating that despite the concerns associated with GM crops, the pressing need to have food overrode their fears. Watt agrees with this.