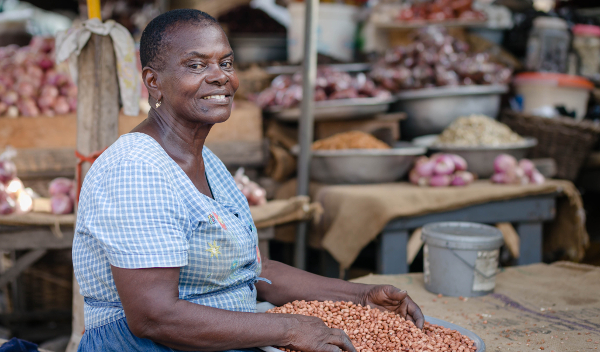 Naa Koshi, an informal trader of groundnuts in Ghana, is a client of the country’s new micro-pension scheme, the People’s Pension Trust Ghana (PPTG).

Pension funds play an increasingly prominent role in Africa’s development, especially as life expectancy rises in many markets – along with the cost of living. As a result, the continent has attracted various global pension companies, and it is estimated that pension fund assets in just 16 countries – that make up 65% of Africa’s GDP – total about US$334bn, according to research by RisCura.

However, these pension funds typically exclude the majority of the African population: the people who work in the informal sector. From smallholder farmers to taxi drivers and informal retailers, it is these people who are most likely to fall prey to old-age poverty, because they are unable to save for a time when they can no longer earn a living.

But a micro-pension scheme in Ghana is looking to change the status quo. The People’s Pension Trust Ghana (PPTG), launched by the Dutch company Enviu, is offering pension savings products tailor-made for Ghana’s informal sector.

After two years of market research in the country, the company received its pension licence from the National Pension Regulating Authority Ghana in September. It has since grown to over 4,000 registered clients.

According to PPTG CEO Samuel Waterberg, there are about 30 private pension companies targeting the formal market in Ghana, but PPTG is the first to specifically focus on the informal sector.

PPTG’s pension savings product allows its informal sector clients to contribute what they can per month, with the opportunity of withdrawing 50% of their annual contribution. Payments can be made via their mobile money wallets or through group collections, by organising community members into cooperatives.

PPTG’s pilot projects in the market revealed that, on average, their clients contribute around $125 per year, with about 10% making use of the option to withdraw some of their contribution.

Ideally, Waterberg believes PPTG’s clients should be contributing $150 per annum to their pensions, an amount he says is feasible for informal sector workers. If a client contributes this every year from the age of 30, by the time they are 60 they can receive an annual payout of $360 for the next 20 years.

Waterberg expects the fund to reach 500,000 clients within five years, and have a total of $25m in assets. However, to do this the company must first win the trust of a market that is typically nervous about parting with its hard-earned and limited money.

There have also been other micro-savings companies in the past who have made similar promises to the informal sector, but have failed to deliver for various reasons. This has heightened market distrust.

To counter this, PPTG is partnering with established companies – that are already working with the informal sector – to offer pensions as an added benefit. It is also conducting financial literacy programmes to help its clients better understand how pension schemes work and how much they can afford to save.

Waterberg believes that PPTG’s strength lies in the fact that it is a for-profit business.

“We have designed PPTG so that, in the long run, it is definitely able to make a lot of profit… and also help people come out of poverty.”