This week General Motors (GM) transported around 25 journalists from across sub-Saharan Africa to Hoedspruit by the Kruger National Park in South Africa. The mission: to test drive their new 6th Generation Isuzu pick-up, a vehicle that will “conquer Africa” according to Mario Spangenberg, president and managing director of GM Africa. 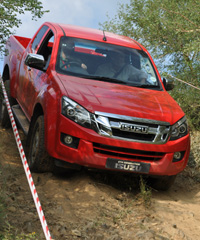 To cater for the different African markets and to become a much stronger player on the continent, the Isuzu pick-up will, for the first time, be manufactured in both right-hand and left-hand drive. While this new range has been launched in the South African market, the rollout of the new Isuzu KB (D-Max in other markets) across the continent is expected to take place over the upcoming months.

“This will obviously be in a staggered approach country by country but our anticipation is that we can grow a lot with this vehicle,” Spangenberg told the group of journalists.

There are 16 specific models for the line-up in the African markets, all tailored to cater specifically for various African terrain and customer needs, according to GM.

The journalists were allowed to drive the new Isuzu across trying courses designed to display the vehicle’s capability through diverse conditions, including a few nerve-racking hills that could cause even the most sophisticated 4x4ers to develop a tortoise neck. Off-road driveability was severely tested and journalists took turns in driving through muddy clay, large holes in the road and some menacing tracks. The following day tested speed (both on and off-road), and while these trials were less impressive – considering the short strip of road and the advice not to exceed 80km/h – the new Isuzu pick-up performed smoothly.

Catering for the growing middle class

Judging by how journalists were wined and dined during their two-day stay for the launch, GM is clearly investing in making a positive impression on their African audience. Why? They are seeing potential profits in these markets. And for good reason. Last year GM sold 180,493 vehicles on the continent, a growth in sales of 17.5% from 2011.

“But now with this [new Isuzu] product coming to market, we are expecting exponential growth. And if you look at all the investment in infrastructure that is happening in Africa, we have got the right product and we have got a distribution footprint in all the right markets… now it’s [about] getting that going and one of our biggest focal points will be on the customer,” she explained.

One of the ways that GM has invested in catering for this customer is through their parts distribution centre at the Coega industrial development zone in Port Elizabeth. This centre will supply and support the African markets.

“We spent R250 million (US$27 million) in setting up this facility and with all the vehicles – we do Chevrolet, Opel and Isuzu – you’ve got to continue to supply parts for a couple of years to support the customers [after the sale],” continued van Huyssteen. “A lot of our competitors have good products but if you want to distinguish yourself from the rest then you have got to make sure that the customer has a good ownership experience and that is where we are going to be putting a lot of our focus.”

How we made it in Africa reported earlier this year that in East Africa, where the Isuzu brand is strong, the market share grew from 25% in 2011 to 27% last year.

GM has just under 200 dealerships across Africa and Van Huyssteen said these on-the-ground partners help GM identify the opportunities and specifications for individual African markets. “For example in Kenya, the single cab – you know, the workhorse vehicle – that’s more in demand there but if you go to a market like Angola, they want luxury, double cab bakkies or pick-ups. So you can’t have a one size fits all solution. You have got to understand the markets, so you have got to take time to listen and give the customer what the customer wants and I think what is also going to be key is that because you have so many grey imports in many of these markets, we need to be able to demonstrate the benefits of buying a new vehicle which means you get the after-market support,” she explained.

A big part of GM’s business for these vehicles has also been catering to governments, as well as the United Nations.

“The high potential markets as we see them are Angola, Nigeria, Mozambique,” added van Huyssteen. “In terms of our presence in Angola, we have been there through our Chevrolet product. Now we are going to be there with our Isuzu product when we build the Isuzu left-hand drive – that’s the opportunity for us. So we need to build that brand and if you look at the media that are [at this launch], we have media from Ethiopia – because Ethiopia is also an emerging market – and Ghana for example. So we have carefully selected the countries that are present because that’s where we feel the most opportunities are with our pick-up.”

It is estimated that the new vehicle industry in Africa will grow to about two million by 2016.