American conglomerate General Electric says it will invest US$1 billion in Nigeria, promising to more than triple the country’s electrical output over the next 10 years. This comes as Nigeria seeks to reform its dilapidated and corrupt power sector. 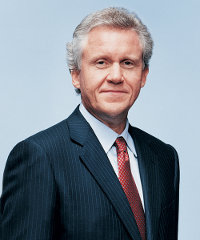 Jeff Immelt is chairman and CEO of GE

Nigeria is a country that runs on generators. Most people don’t have access to electricity and those that do have it sporadically. On CNN last week, President Goodluck Jonathan said by the end of the year, the country’s daily electrical problems will be more or less solved.

Clement Nwankwo, the executive director of the Policy and Legal Advocacy Center in Abuja, said that maybe the president just doesn’t realise how bad Nigeria’s electrical system is.

“It’s possible the sound of his generator is far away from his house and office, so he doesn’t know when the switch is made between generators and public power supply, but there is very poor power supply to the generality of homes in Nigeria,” Nwankwo said.

Nigeria’s power sector is notoriously corrupt, he said, adding that every Nigerian leader claims to be able to stop the blackouts in a single year, and nothing changes.

However, Nigeria’s Minister of Trade and Investment Olusegun Aganga said this time will be different.

Aganga said the plan will work because it not just about generating megawatts, it’s about boosting the national economy and encouraging investment.

GE says $250 million will be invested immediately and the rest of the money will be spent on upkeep, training and salaries. In a speech Thursday in the capital, GE Chairman Jeff Immelt said the projects will create more than 2,000 jobs in Nigeria and nearly all of them will go to Nigerians.

“The time is now. The place is Nigeria. The how is the local team. Now the focus on everything is the execution,” said Immelt.

In the Nigerian development world, the “execution” of projects is usually where things can get stalled by corruption or violence.

Last year, legislators produced a report that detailed how public funds got stolen by oil officials and fuel companies. The money was intended to subsidise the cost of fuel for average Nigerians, but instead, $6.7 billion disappeared. Much of it went to companies that did not work in the fuel sector at all.

In the Niger Delta, where the oil is and where GE’s new plant will be, oil companies say they lose as much as a billion dollars in revenue a month to oil theft and sabotage. –VOA