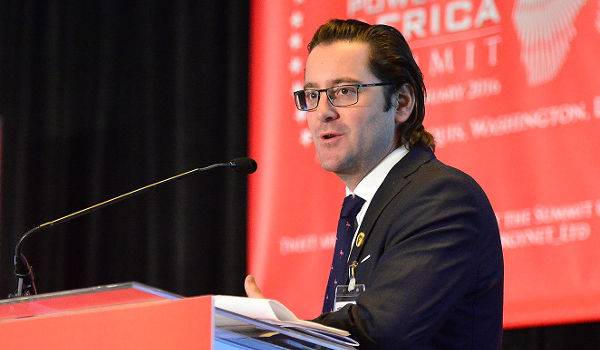 Simon Gosling is the Managing Director of EnergyNet Ltd, a company which has been producing investment forums and executive dialogues for Africa’s power sector for the last 23 years. EnergyNet’s meetings take place across the African continent and in Europe, the USA, China and North America.

What significant developments have you witnessed in the industry over the last few years?

That’s an interesting question because I’ve probably got to look at this from two different industries; conferences and energy. I’ll start briefly with the conference perspective as I’m far more in control of this. Firstly, I am exceptionally proud of what the EnergyNet team has achieved over the last five years, which includes investing a percentage of our net profits in African students, off grid energy projects, our ‘Arts: Energy Partnership’ which is set for great things in 2017 and also championing our #responsibleconferencing agenda.

I firmly believe that all conference organisers should behave responsibly, giving back to the communities and leading an agenda which draws on our partners experiences as well as our own. Therefore from a conference perspective, I think the significant change I personally have witnessed (because we have led it), is that the companies we work with are starting to engage with us and our network in more productive and meaningful way where we can directly link the success of our conferences to our work in the communities with which we serve.

With regards to the energy sector itself I’m not sure how relevant my opinion is, however I think there have been some very positive movements overall especially from technologies being utilised across the continent. The surge in interest in gas to power is clearly the biggest change from five years ago, and again we see South Africa leading the field here. However, Morocco and Egypt are making huge strides with their gas IPPs and with such emphasis from both HRH King Mohamed VI and President El-Sisi to succeed with gas, we may well find that the winners benefit significantly from a lower gas price than those that come in further down the field.

Most exciting for me, however, is the potential of an ECOWAS-owned regional gas IPP procurement programme. Being an eternal optimist I firmly believe that a regionally owned and centrally operated programme is a possibility for West African states and the potential of a cross border procurement programme would be game changing. Early feedback suggests that if ECOWAS could secure the remit for such a programme, the private sector would be eager to engage, bringing billions of dollars of multilateral backed investment. In the long term this could create a circular economy where West African gas feeds into the gas infrastructure for the whole region.

Other areas of note are obviously the renewables and off grid sectors. In the last 18 months off-grid companies have started to attract significant interest with some traditional energy players finally seeing ‘scalability’ in off grid. Companies like Solektra and Powerhive are changing how we think about unconnected communities and data-tapping into the allusive 600 million people that live without access to basic energy.

What was your industry highlight of 2016?

There have been two highlights for me; one was our South Africa: Gas Options conference in October and the other was the Africa Renewable Energy Forum in Morocco. Both these meetings have proved to add real value to investors and the public sector alike. What’s so exciting for me here is that we’re working closely with both countries and that both are meeting and learning from each other about challenges and opportunities which politically for these countries could be game changing for the whole continent.

What projects are you most excited about in 2017?

These are tough questions to respond to briefly – there is so much happening in the energy sector around the world right now that pinpointing one or two projects is impossible. I think one of the more exciting projects is the China State Grid developed Pakistan transmission network. What’s exciting is that this project reflects conversations I had in Beijing three years ago at our Africa Infrastructure & Power Forum where senior Chinese officials talked about the objectives to develop a high voltage transmission network, crossing borders and linking regions. This recent announcement is a stepping stone towards a broader vision to link Africa to Europe and a more connected world.  It’s this interconnectivity which will enable fast growing economies to surpass economic expectations.

The other [projects] are the Gas IPP programmes in South Africa and Morocco and the reason I’m excited about these programmes is because of the scale of the projects and how the success of them will draw heavily on many international partnerships and interlinked services such as shipping, FSRU, trading, planning and power generation to name a few. Most excitingly though is the peripheral gas utilisation programmes that are being developed around the core projects – for example in South Africa, the Gas IPP anchor programme could transform the county’s economy creating gas based industries that will create hundreds of thousands of jobs and lead to a surge in wealth across the nation.  Adding to that the potential for Mozambique, Namibia, Tanzania and other neighbouring countries that will directly benefit from partnering with the larger economies, this deep-impact level of thinking is, for me, mind-blowing!

As you know, last year EnergyNet started working closely with the governments of Colombia, Mexico, Argentina, Chile and Peru in LATAM as well as Pakistan, Indonesia and Myanmar in Asia. The reasons for this is that I believe the companies we see being successful in Africa should be able to replicate that success in these other ‘growing economies’ and therefore EnergyNet has a responsibility to connect these governments with the world’s best developers. I’m therefore more excited about the sector as a global industry driving poverty alleviation through commercial projects than one country or region.

What new perspectives and discussions will come out of bringing AEF to Denmark, do you think?

It’s funny, when I think back to over the last four years of AEF, 50% of the destinations we took the meeting to were not considered relevant or appealing when we made the announcements. All destinations ended up being huge successes for the governments and private sector organisations which attended, adding significant perspective and building new relationships which we see moving forward at our subsequent meetings.

As an organiser that wants to contribute to the furtherment of the sector it’s important that we listen to our partners and learn from them so we can take investors and public sector stakeholders on a journey that opens their eyes to new ideas, technology and investors, and Denmark is by all means one of those destinations that has it all, not because Denmark is doing more than other countries necessarily, but because the Nordic countries as a group are more than likely doing far more projects than governments and investors across Africa probably realise. You only have to research briefly online to get an idea how advanced and efficient Denmark’s own energy mix is want to learn more about how they ‘did it’ and in addition, cooperation across the Nordic states is well crafted and the ‘gold standard’ for regional diplomacy.

Whilst I fully expect AEF: 2017 in Denmark to be a much more exclusive, high-level forum by comparison to the hugeness of London which saw record breaking levels of attendance, I already know that Copenhagen, specifically for the aforementioned reasons, will be one of the most impactful, exciting and important forums African stakeholders are ever likely to attend.

What role will LNG-to-power play in driving the growth of the power sector?

I hear all the time that gas is the enabler of renewables, that coal is bad, that nuclear is the answer and that renewables are too cheap or too expensive; well I agree with a some of these statements and disagree with others.  What I do believe, however, is that the sector must be commercial and that gas-to-power has the potential to trigger a wave of investment downstream that will dwarf anything we’ve seen to date in Africa; greater than the telecoms and the power sector itself.  The speed of population growth, the changing mix of [low, medium, high] income families, increasing consumer spending power and the ability of manufactures to move goods around the continent will be the enabling factor for real growth and the liberalisation of the energy sector – however, gas-to-power will be the innovation that starts it all.

More information about EnergyNet’s upcoming meetings in 2017 can be found at www.energynet.co.uk