Kenyans can now purchase cooking gas for less than a dollar. Premier Gas Company Limited has brought liquefied petroleum gas (LPG), dubbed Pima Gas, to low income earners and residents of informal settlements. One month since its launch, the company has 1,300 clients in four low income areas in Nairobi, amidst plans for expansion across major towns in Kenya. How we made it in Africa’s Dinfin Mulupi chats with Michael Momanyi, general manager of Premier Gas. 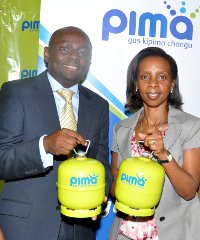 What is the story behind Pima Gas?
About two and a half years ago a group of investors wanted to enter the household energy sector in Kenya but they did not want to do it the traditional way. We set up a project team that was commissioned with finding out where the greatest need for the household energy sector in Kenya was. Our research showed that at that time there were 400,000 liquefied petroleum gas (LPG) users. There were about 9 million households across the country out of which 3.5 million resided in urban areas. More than 3 million households in urban areas had no access to LPG. The reason was the cost of hardware (gas cylinders) was too high. The lifestyle of most people, who earn very low and infrequent incomes, meant they could not afford LPG since their purchase decision is driven by their incomes. We found that most people relied on charcoal and kerosene, which is less efficient and has environmental and health risks. We then decided to model a perfect substitute to both kerosene and charcoal. The International Finance Corporation (IFC), the World Bank’s private sector lending arm, has invested US$2 million in Premier Gas, which secures their 20% stake in the firm.

So what is different about Pima Gas?
There are 18 registered LPG companies in Kenya that serve 400,000 households. None of them thought about the 3 million households that do not have access to LPG. People in low income areas do not want freebies, they simply want affordable services they can pay for. We seek to provide our customers with LPG at a good price, at a location that is as close as possible to their homes and in quantities that they require or can afford. We designed a dispenser to dispense LPG as close as possible to our customers. On a day our customer has less than a dollar they should be able to buy Pima Gas. A one kilogram cylinder selling for just under $4 lasts an average household about a week.

What has been happening since your launch in February?
The Pima (Swahili for weigh) concept is a world first. We need to test it. We have kicked off operations in four low income areas in Nairobi. People are buying and refilling. We have about 1,300 customers. The majority of refills are for one kilogram of gas. Our customers have been able to make savings on their monthly energy budgets. In the next three months we hope to expand to more areas.

Is yours a sustainable model?
This is an inclusive business model that incorporates our target customers as vendors and customers. It creates opportunities for business and employment for low income earners. Our model is also a profit making model, it is not a subsidy or a non-profit. Our model has two people between Premier Gas and the customer, making it easy for us to control the price.