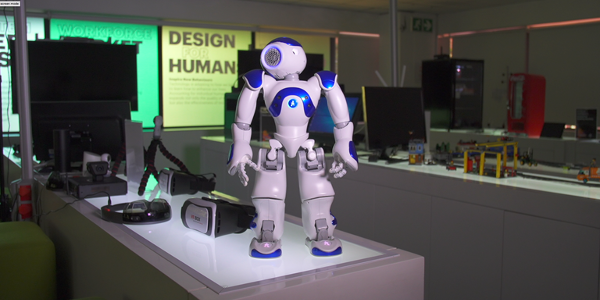 RoMo – a robot developed by Accenture.

On this week’s episode of ‘CNN Marketplace Africa’, the programme examines the potential impact artificial intelligence (AI) could have on South African businesses and industry.

Host Eleni Giokos reports from Accenture’s African headquarters where new technologies are sampled by the global consultancy firm. According to Accenture, AI could add 1% to South Africa’s GDP by 2035, with the country’s output hitting 4.5%.

Roze Phillips, the managing director for Accenture Consulting in Africa, explains that although many countries are riding the AI wave, Africa has much to catch up on: “We still have high unemployment… We’re not seeing the economic potential of artificial intelligence.”

‘Marketplace Africa’ meets one company utilising AI to make its mark globally – Aerobotics, a drone company which analyses farm lands, estimates that AI can offer farmers a 10% increase in yields.

Andrew Burdock, the chief operating officer, explains: “There’s so much data out there that we weren’t collecting and [there were] issues developing on the farm that have a big impact on yield going unnoticed we needed a way of collecting across whole farm.”

However, the role of AI is not just restricted to business. The University of Johannesburg is looking to become a leading educational AI hub in Africa, and in turn incorporate the technology into business solutions for a new generation.

Tshilidzi Marwala, vice chancellor at the University of Johannesburg, outlines the institution’s development to CNN: “We have the largest concentration of people with PhDs in AI and we are the leading centre for artificial intelligence in this continent.”

The university has hired Professor Qing-Guo Wang from China to assist students in developing AI solutions. ‘Marketplace Africa’ witnesses a new bottle recognition technology developed by Professor Wang and a student, which is intended to help companies with large inventories.

Whilst there is a fear that the rise of AI will lead to people losing jobs as companies look towards automation, Giokos asks RoMo – a robot developed by Accenture – on whether it believes there is a risk to people-operated roles in the future. RoMo tells Giokos: “Not exactly. The technology complements humans and is taking on more sophisticated roles within technology interfaces.”