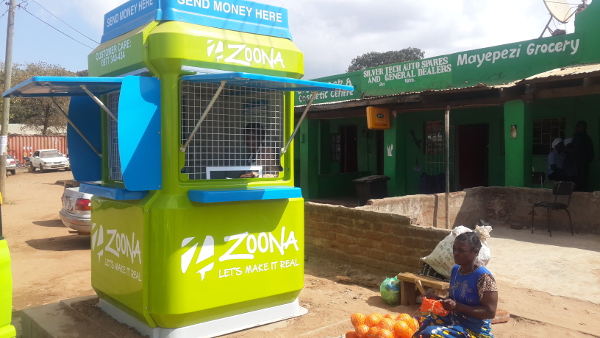 A Zoona outlet in Zambia.

Founded in 2009, the Zambian startup Zoona is now in full expansion. Like all venture capital-backed startups, Zoona has been through its fair share of ups and downs. Its founder Mike Quinn gives us his personal account of these decisive steps.

In February 2012, I wrote a lengthy essay called “My Mobile Transactions Story” which detailed my startup journey from stumbling upon founding entrepreneurs Brad and Brett Magrath to closing a $4m Series A venture capital investment. I shared many of the challenges we overcame to achieve that milestone. It’s now six years later and that story is due for an update.

In the beginning there was Brad and Brett, two entrepreneurial brothers from Kitwe, Zambia, who dreamt of a cashless Africa where companies, small businesses and consumers conducted all of their business via mobile transactions. Brett was in his early thirties, married in Cape Town after quitting his cushy job at JP Morgan in London, while Brad, several years older, was married in Zambia and looking to get off the corporate ladder. They tried a few ventures that all started out promising but left them both broke and nearly broken.

The dream of a cashless Africa

One night in Lusaka, Brad was out with an American colleague from USAID talking about his vision when the spark occurred. He sent Brett the ‘now-famous’ text message that he had an idea for their next venture and that it was going to be big. A few months later, the brothers had a $200,000 grant from USAID to launch a pilot to digitise cash payments in the cotton sector. At this time, it was common to see trucks full of cash with armed guards carrying AK-47s driving down horrible rural roads. An international cotton company invested in the brothers, they applied for and received a Bank of Zambia payments’ licence, and they set up a company called Mobile Transactions.

While this was happening, I was completing my MBA at Oxford where I was a Skoll Scholar for Social Entrepreneurship. I had previously spent 2.5 years as a volunteer in Ghana and Zambia with Engineers Without Borders Canada and completed a MSc in international development at the London School of Economics. I was hungry to get back to Africa where I wanted to be an entrepreneur and have an impact but I was too broke and saddled with student debt. I first convinced my fiancé to take the plunge and move to Zambia with me on a whim, and then an early stage investment fund to buy me a plane ticket to search for entrepreneurs to invest in. I sent one email to an American colleague from USAID I knew from my volunteer days (thankfully the same one who knew Brad!) and the day after I arrived in Zambia, I was face to face with Brad and Brett and hearing their inspiring vision.

A year later I found myself asking my retired parents in Canada to mortgage their house and wire $100,000 dollars into a Zambian bank account to save the company from bankruptcy and become a partner in the business. With an ultimate leap of faith, they said yes, after which Brad and Brett made me CEO to lead the company into the next phase. My first move was to convince my MBA colleague Keith Davies to quit his investment banking job and cash in his pension to join us as our CFO. The future was bright.

Only it wasn’t – not yet, at least. A few months later we had burnt through all of our cash (again) and lost a major contract that was the source of most of our revenue. We were left scrambling again, but managed to raise some convertible debt to survive a little longer and also buy out our corporate shareholder. We finally had some runway and took advantage of it to raise a Series A investment. We signed a $4m term sheet with Omidyar Network and Accion at the end of 2011 and closed the deal in February 2012 with feelings of great relief and accomplishment.

We were inspired by the exponential rise of M-Pesa

As Nelson Mandela once said, “After climbing a great hill, one only finds that there are many more hills to climb.” He couldn’t have been more correct. If the beginning was about not running out of cash, the middle was about how to build a business. Our agriculture payments’ product had failed as the demand for cash was too high from small-scale farmers and we had not yet cracked the supply side. Meanwhile, we were inspired by the exponential rise of M-Pesa in Kenya and pivoted into building a franchise agent network to allow Zambians to send and receive money within the country. But unlike M-Pesa, we didn’t have a customer base, a distribution network or a brand to launch from, and had to start from scratch.

What we did have, though, was purpose and perseverance. We selected young entrepreneurs as agents, treated them as our core customers, and invested in the most promising ones to expand to more outlets. We also rebranded from the functional “Mobile Transactions” to the meaningful “Zoona”, which translates to “It’s real” in Zambia. Our model spilled into Malawi while we built a customer service and technology centre in Cape Town to support both markets.

The results started to show. We started achieving exponential growth with new customers turning into repeat users and agents expanding to more and more outlets. Some of our top agents grew to employ dozens of people and transact with over a million dollars per month. We also achieved the milestone of a million active customers and turned profitable as a group. Once again, the future was bright.

But then came the great Zambian currency crash of 2015. The copper price slid downwards following a sharp reduction in demand from China, which hit the Zambian economy hard. The currency depreciated by half in a three-month period, and so did our revenue while our expense base in Cape Town was fixed. This led to a difficult period of consolidation, but we managed to pull through it and raise a $15m Series B investment led by the IFC in 2016 to start growing again.

Since then, we have scaled up our team, invested in preserving our entrepreneurial and purpose-driven culture, and expanded our agent network. We have also developed new products, including pay-outs of international remittances from South Africa with Mukuru as a partner, airtime and utility payments, and our own mobile wallet and digital storage product for customers to keep their money safe. Our customer base has reached 2 million active users who transact over $60m per month at our 3,000 agents, and we are poised for our next phase of growth.

I’m more passionate than ever to fulfil Zoona’s mission

Where will my Zoona story end? Once the problem is solved. There are currently three billion people in the world who lack access to or who are underserved by the formal financial service sector. I’m more passionate than ever to fulfil Zoona’s mission of helping communities thrive and achieve our wildly important goals: build products and services that improve people’s financial health and well-being of one billion people; unleash emerging entrepreneurs to create profitable businesses that create one million jobs; prove that a purpose-driven business can be a global model for growth and impact.

Zambia and Malawi are our starting points where we want to go deep and fully prove our model. Once we do, we plan to expand to achieve Brad and Brett’s original dream of a cashless Africa. As we say at Zoona: Let’s make it real.

This article was originally published in Proparco’s magazine: Private Sector and Development.