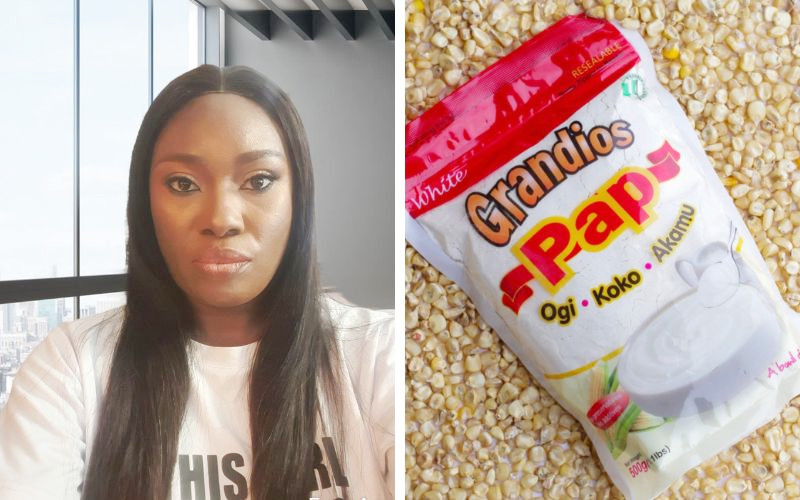 Pap is a local porridge made from fermented maize, sorghum or millet and eaten in many West African countries. In Nigeria, it is commonly known as akamu, ogi or koko and sometimes also used as cereal for babies. But unhygienic preparation methods and a short shelf life discourage many people from buying through informal retail channels.

Oluyemisi Obe had the same problem and set up a food-processing company to produce high-quality pap with a longer shelf life. In 2015, with the support of her husband, she established Prothrive Astute Heights in Lagos, making the brand Grandios Pap from white and yellow maize and brown sorghum.

“I thought about food processing when my children were babies because each time I tried to introduce them to cereal, I would find just one variety. I realised there was an opportunity to produce something readily available to other mothers. That was how I came about the idea and the research started,” she told How we made it in Africa.

“Because of the tedious process, many people cannot produce it independently. They also don’t want to buy from local producers as they don’t trust the production process.”

Obe started by processing 50 kg of the company’s maiden product, Grandios Pap on a daily basis to sell out of her car boot after church service. Seven years later, it now produces several tonnes to meet daily demand.

Facing challenges and growing the business

Expanding the business did not come as easy as she had imagined, despite a ready market for the product.

Obe and her husband initially funded the business with their savings and, for about 18 months, she did not earn a salary. The business also went through a lot of trial and error with equipment. To address this, it had many manual and labour-intensive procedures in place, which discouraged workers and as a result, staff turnover was high.

The biggest challenge, however, was getting approval from the National Agency for Food and Drug Administration and Control (NAFDAC), a Nigerian regulatory agency under the Federal Ministry of Health. Several stores initially rejected the product because it didn’t have regulatory approval. However, by modelling the factory and facilities in line with the agency guidelines, they received approval within a reasonable period.

The company started by sourcing maize from local markets but used third-party suppliers as the need grew.

“Right now, we go directly to farmers and farmers’ markets. We also partner with HarvestPlus, which works with farmers to grow high-quality maize. We get our raw materials from farmers they have trained and supported and no longer use third-party suppliers,” she reveals.

In 2017, two years after production began, the company obtained a three-year loan from the Lagos State Employment Trust Fund. Between 2019 and 2021, it also received grants from different national and international agencies including funds from a World Bank-assisted Federal Government of Nigeria project; a Global Alliance for Improved Nutrition grant; and funding from the Nigerian Export Promotion Council (NEPC).

“These funds helped the business to grow and achieve some of its goals. Several of the grants were for equipment, and we made sure we bought these. Others were for working capital support and raw materials,” recalls Obe.

From selling directly to customers in churches, mosques and other public places, their team marketed the products to supermarkets after securing regulatory approval.

Over time, the company started working with distributors and agents and created a network for distribution. “We increased the number of distributors and retailers by building our relationships. We also created an online presence through our website and social media platforms. The cost of offline marketing for small businesses is enormous, so, we had to learn how to use social media for our marketing and it has paid off,” she explains.

During the last seven years, the business has grown by over 3,000% and sells to major supermarkets in Nigeria, including Shoprite, Spar, Ebeano, Justrite and other retailers across the country.

Some customers have independently taken the products to unlikely countries such as China and Japan. “Grandios Pap is sold in the UK and the US, which are regular markets for some made-in-Nigeria products. But when you hear people talking about your products in other places, it shows your marketing and sales efforts are yielding results.

“When we started, there was no standard for pap. Being invited to join a committee by the Standards Organisation of Nigeria to discuss and recommend standards for packaging was a major milestone,” she adds.

According to the CEO, Nigeria’s e-commerce sector was in its infancy when the company began, but over the years, it has evolved. People now sell via their websites and social media, and many micro, small and medium enterprises benefit.

Despite the boom in e-commerce and the benefits to businesses, the logistics cost remains a dampener. “Delivery costs are often higher than the product itself. So, if there is a way to reduce that, it will help e-commerce grow faster,” she adds.

Obe has plenty of plans for growth for Grandios Pap, both in the short and long term. Immediate plans include developing varieties of the existing products and other traditional foods in smaller pouches for convenience.

But her most important aim is to be listed on the Nigerian Stock Exchange. “We are working on listing. I know there will come a time when I would want to retire but I want the company to continue.”

She also plans to work with distributors in other African countries and one of her target markets is South Africa. She says it seems interesting because South Africans also consume pap like West Africans but in a more solid form.