After 30 years working in the IT industry, Roly Adlam decided to call it quits. The British entrepreneur packed his bags and moved to Kenya. He eventually decided to start Rift Valley Leather (RVL), a company that designs and manufactures leather bags and accessories. 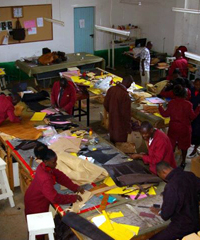 RVL operates two stores in Nairobi and has exported to 15 international markets. The manufacturer also sells to camps, hotels and restaurants and corporate organisations in the region. Although its products are niche and costly, the business has been considerably successful.

“You only have to look at the roads to see the very expensive cars. Where the money comes from I don’t know, but the money is here,” said Adlam. “We aim at the middle class and the higher echelons of society. Half of our customers are Kenyans and the other half are foreigners and expatriates.”

The Briton noted that while US and European economies are currently strained, business is booming in Africa thanks to the growing middle class. “It is clear that East Africa, and Kenya in particular, is a booming [market] in the world at the moment. The modern western world is suffering from the financial indiscretions… [but] it is not adversely affecting East Africa.”

He, however, argued that while many reports are favourable about the prospects of Africa, his experience of doing business in Kenya has not been smooth sailing.

“Had I known how massive the challenges were before I got here, I probably wouldn’t have done it,” he said. “It has been five years of very hard work, huge amount of stress and no commensurate satisfaction. But, it is coming. There are significant challenges and it takes a brave man or woman who knows what the challenges are to even contemplate approaching them. It is a difficult environment.”

The difficulties notwithstanding, Adlam noted that foreign investors should not shy away from doing business in Africa.

“I don’t regret it,” said Adlam. “Africa will boom if trade is facilitated. If you are organised, persistent and patient, you should invest here.”

Adlam cited a lack of raw materials and bureaucracy as some of the challenges he has encountered. “Raw materials are not easy to acquire. There is [a] very long lead time in getting leather… [it] is currently at least four weeks for a substantial order. A leather bag has at least nine raw materials. If you get a job and you don’t have one raw material, you can’t start the job.”

“Kenya may be 50 years old and may be mature in many ways, but it is certainly not mature in terms of doing business [and] facilitating the ease of doing business,” said Adlam. “To put it in perspective, I have to renew my work permit in September. I know this is going to be a monumental headache.”

Cross border trade between African countries is also challenging. “It is more problematic exporting in East Africa than it is exporting to Europe or America. We have exported many times to Uganda and we haven’t had a smooth export yet. It’s not easy.”

Adlam advises foreign entrepreneurs planning to venture into Africa to do thorough research. “Ask questions that you wouldn’t normally have to ask, let’s say in Britain. Don’t make assumptions. You have to religiously research the difficulties of setting up a company and ask questions about the small things that are taken for granted in Europe.”

Adlam added that entrepreneurs should ensure that their business plan is executable within the African environment, employ the right people and keep rigid controls to avoid theft within the company.

“You have got to be pragmatic, have a product that you can sell in the environment, be patient and work a lot harder than if you were an employee. Don’t waste money; really think when you spend money,” he said.

Next year Adlam will be expanding his business to Rwanda, which is often ranked top in East Africa for its ease of doing business.

RVL is also set to open a third store in Nairobi later this year. Adlam is hoping to open two more stores in the region, expand his manufacturing plant in Nairobi and enter into partnerships with other businesses to push the RVL brand.

“It is our intention to become the best sub-Saharan leather design house,” he concluded.