It has been less than a week since the announcement that entries are open for the premier award for Africa’s youngest entrepreneurs, the Anzisha Prize. The response has been encouraging. 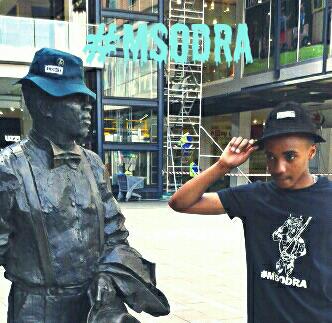 The very first application received for the Anzisha Prize this year was from Lonwabo Ncanda, a 17-year-old matric student from Soweto, South Africa

Over US$75,000 in cash prizes will be shared among 12 of the continent’s most exciting social and business entrepreneurs between the ages of 15 and 22. Official tour activities have already started this week in Abidjan (Côte d’Ivoire), Luanda (Angola) and Kampala (Uganda). And in March the Anzisha Prize team will be making its way to Yaoundé (Cameroon) and Rabat (Morocco) hoping to encourage entries.

Within just a few days, there have already been around 30 applications from bright, young innovators spanning the continent – from Liberia to South Africa, Angola to Kenya.

Here is a taste of some of them.

IMPORTANT NOTE: Applications for the prize are open till 15 April. Those profiled below have been selected randomly and have not yet been vetted by the Anzisha team.

The very first applicant this year is Lonwabo Ncanda, a 17-year-old matric student from Soweto, South Africa. Last year he co-founded an online youth entertainment platform called UltraShare which showcases and celebrates local artists and brands on social media. In addition, Ncanda and his team have also released their own clothing brand called #MSODRA, which they showcase during various events.

Ncanda believes local talent and artists need to be nurtured and celebrated, and his dreams include one day being able to host a festival featuring artists from his community and country, as well as across the continent.

Smiling Chandinga (20) from Zimbabwe is the Prize’s second applicant this year and is operating in a sector vital to Africa’s future: food and agriculture. His project, Smile Enterprises, operates a cat fish farm and uses proceeds made from fish sales to feed underprivileged and undernourished members of his community in Chinhoyi.

His goal is to venture into food manufacturing of other proteins such as mince and sausages, although he realises this will take time. He also hopes to expand his fish farm to include other species. Furthermore, he aims to provide employment in his community for other youth, shielding them from falling prey to lives of crime and drug-abuse.

Chandinga says he believes in doing an exceptional job, and does not easily give up.

“I am an individual who believes young people in Africa should be the ones at the forefront of developing the continent for it is theirs, and they should design it in the way they’d like it to be in the future.”

Rwandan Ysolde Shimwe is a determined 22-year-old entrepreneur and one of the Anzisha Prize’s first woman applicants this year. In 2013 she co-founded Uzuri K&Y Designs with her business partner whom she met at university. The duo design and manufacture their own line of fashion items from their workshop, including waterproof shoes and bags.

Today the company employs four people, and earns around $700 a month, with budding business prospects. Their designs are already retailed at two shops in Kigali, including one at the international airport, and they have also received an order for 1,000 pairs of shoes from an importer in Canada, set to be delivered by May. And in addition the duo are in discussions with online retailers, an area where they see big potential.

According to Shimwe, creating employment, especially for women, is a key goal. The partners are already working with women co-operatives. “Also, we produce our shoes from an incubation centre, where we have been able to offer jobs to more than 20 people for an order we received,” she adds.

“We take time to train them before we start production, and believe that we not only contribute to the improvement of their living conditions, but also their skills and knowledge which in turn leads to their empowerment.”

4. Getting street kids off the street in Burundi

Burundi’s Haragirimana Leis Bruel (22) is a journalist, political science student, and social entrepreneur. He heard about the Anzisha Prize through the Bujumbura Hub for the World Economic Forum’s Global Shapers Community of which he is a member.

He is also the founder of Youth Building in Synergy to end Poverty (YBSP), an organisation that operates several projects towards helping the most underprivileged in Bujumbura. His latest is Feed A Child, which he formed last year. It is geared towards identifying street kids and returning them to their families, a problem that escalated sharply in 1994 during the Burundi civil war.

“Despite the war’s end, the phenomenon of street children has not been stopped and is even trivialised because of the low socio-economic level of Burundian households, lack of government policy for the rehabilitation of street children, and the disinterest of the general population with respect to this problem,” he explains.

He wants the Feed A Child project to highlight the problem of street children. In addition he hopes to set up a foster home and skills development centre for the street kids.

He has always wanted to be an entrepreneur, and says he could not be happier to be running his own transport company, even though it has seldom been easy.

He started out in the aluminium doors and windows business. At first he spent a lot of time knocking on doors trying to find work, before getting a big contract with a construction company. However, once the contract was completed, business started to run dry mainly due to intense competition.

Then, after market research, Niengue spotted another opportunity with inter-provincial transportation. He owns his own minibus, and currently employs two people, but sees huge potential to grow. He is hoping to find funding to buy more vehicles, and employ more people.

Niengue admits he has a long way to go to be a success, but is willing to put in the necessary hard work and dedication to get there. As he puts it: “It is only in the dictionary that success comes before work.”