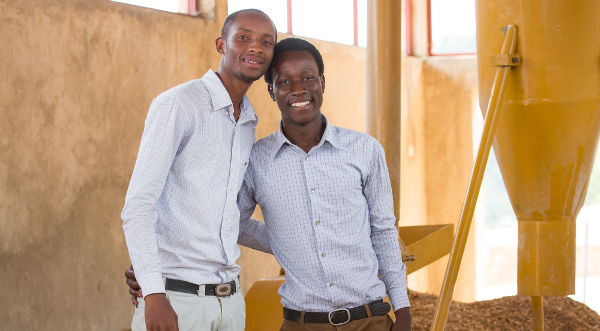 Rwandan Jean Bosco Nzeyimana (right) is the founder of Habona, a company that produces affordable and environmentally friendly products – including biomass briquettes, biogas and organic fertiliser – from waste.

As concern over rising CO₂ emissions and climate change increasingly make its way onto the agenda of governments and global organisations, the need for environmentally-friendly solutions has never been so clear.

The same need exists in Africa, despite the continent’s CO₂ emissions being but a fraction of the industrialised world. According to Caroline Kende-Robb, executive director for the Kofi Annan-led Africa Progress Panel, while no region has done less to contribute to the climate crisis, no region will pay a higher price for failure to tackle it.

But in many ways African countries are well positioned to leapfrog the traditional damaging practices of the developed world. Renewable energy solutions can be used instead of fossil fuels to power the continent and ultimately bring electricity to all. And a culture of recycling rather than waste can be instilled from the start.

“Innovative entrepreneurs are needed to deploy green solutions and change the way things have been done in the past,” says Grace Kalisha, senior programmes manager at the African Leadership Academy.

“And every year we see a growing number of young, environmentally-focused entrepreneurs applying for the Anzisha Prize. They should be encouraged and supported.”

While finalists have not yet been determined for the 2015 Anzisha Prize, a sample of some of the applicants within the renewable energy and recycling space has been highlighted below.

IMPORTANT NOTE: Finalists for the Anzisha Prize, Africa’s premier award for its youngest entrepreneurs, have not been announced. The entrepreneurs profiled below have been selected randomly, and are not necessarily winners.

Rwandan Jean Bosco Nzeyimana (22) is the founder of Habona, which produces affordable and environmentally friendly products – including biomass briquettes, biogas and organic fertiliser – from waste.

According to Nzeyimana, around 80% of energy used by Rwandan households comes from burning wood, and is resulting in massive deforestation across the country.

“Despite this, Rwanda has enormous supplies of other resources, such as biodegradable waste that can be used for organic fertiliser and renewable energy. And better utilising these resources can help uplift the lives of underprivileged farmers,” he adds.

Habona’s team collects rice husks from farmers, as well as other biodegradable waste from households, landfills and tea/coffee factories to produce its products.

The initiative has already won Nzeyimana a number of awards, including the 2013 African Innovation Prize’s Business Plan Competition, and he has recently participated in Barack Obama’s Mandela Washington Fellowship in the US.

“The contract offers us the privilege to be the sole collector of waste in the district,” explained Nzeyimana. “We plan to expand our reach in all districts of Rwanda and towards the rest of East Africa.”

Alex Mativo (21) is a visual artist currently pursuing a bachelor’s degree in computer science. He is also the founder of E-LAB, a company that aims to eradicate electronic waste by transforming it into artwork and beautifully designed products, such as wall clocks, furniture and jewellery. The company employs seven people.

“With over 5,000 tonnes of electronic waste coming from Kenya alone, most of it ends up in dumpsites and this has detrimental effects on the people and community due to the toxic heavy metals it contains,” explains Mativo.

Alongside showcasing E-LAB’s designs, the company has launched its Green City campaign, which hopes to create awareness around the need for responsible disposal of electronics and appliances.

“Our Green City campaign is aimed at creating a countrywide awareness that e-waste pollutants at contaminated sites affect the health of more than 150 million people worldwide.”

Born in Ifakara, a small rural town of Tanzania’s Kilombero District, George Mtemahanji (now 22) managed to get an education in Italy after his mother moved to the country for work in 2003. In 2012 he graduated as a technician in renewable energy and decided he wanted to use his skills to open a business in his home town in Tanzania.

After much planning, he and a classmate co-founded SunSweet Solar, a photovoltaic company that imports solar energy solutions and materials from Europe. According to Mtemahanji, the company constructed the largest photovoltaic plant in the region, at a school in Ifakara.

The business has also partnered with Fosera, a German solar company, to supply energy solutions in rural areas of Tanzania.

“Today a litre of kerosene costs $1.10. That means the people in rural areas spent 73% more with kerosene per month than with our solar system.”

And in addition to economic advantages, Mtemahanji adds that solar power solutions have considerable health benefits when compared to kerosene, which releases carbon monoxide.

Striving for a cleaner, healthier DRC with waste management

Emmanuel Mukadi (18) started VertDC in the Democratic Republic of Congo last year, a waste management company that aims to provide a much needed municipal service in Lubumbashi by collecting and recycling waste from streets, households and small business. It hopes to promote a cleaner, greener and more sanitary environment, and already employs five people.

According to Mukadi, his clients are looking for an alternative to informal dumpsites in the city, and he hopes to gain financing for the establishment of public trash cans to discourage people from throwing their waste in the streets.

“The vision for the company is to grow to a national level, offering our services to all middle class households in the country while entering agreements with the government to clean the streets,” highlights Mukadi.

Ghanaian social entrepreneur Mabel Suglo (21) is the co-founder of the Eco-Shoes Project, an initiative that assists artisans with disabilities to create marketable shoes from used tyres and recycled cloth. Started in 2013, the project currently employs five people.

“There are millions of discarded car tyre stockpiles and waste materials in Ghana which pose an environmental and health hazard,” says Suglo.

“Eco-Shoes rescues some of the millions of tyres and other material waste creating an environmental nuisance, to make fashionable and comfortable shoes.”

She hopes to raise funds to buy better machinery to enhance productivity, invest in an e-commerce site, as well as provide additional training (such as computer skills that will assist in designing shoes) for her artisans.