The International Energy Agency forecasts a growing role for natural gas in the world’s energy mix. Large gas discoveries off the coastlines of Tanzania and Mozambique could be a major economic boost to these countries. However, prosperity is by no means a given and there are many risks that could put a damper on the region’s gas prospects. Here is what you should know about East Africa’s nascent gas industry: 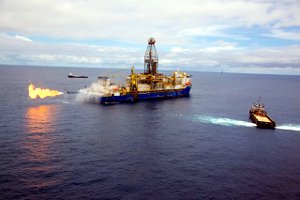 Natural gas tests off the coast of Mozambique.

1. Significant discoveries: “The big future for African gas lies in the east of Africa with massive offshore gas discoveries in East Africa, particularly in Mozambique and Tanzania,” says professional services firm Ernst & Young in a recent report, titled ‘Natural gas in Africa: The frontiers of the Golden Age’.

US-based Anadarko Petroleum and Italian oil and gas company Eni have announced significant gas discoveries in their respective blocks in northern Mozambique. In Tanzania, BG Group and Ophir Energy have also found major gas deposits, as has Statoil and its partner ExxonMobil. There is also increasing interest in neighbouring offshore Kenya and Madagascar, based on the belief that similar geological compositions will be found.

“The Anadarko and Eni discoveries in Areas 1 and 4 in Mozambique could hold more than 100 trillion cubic feet and could theoretically support as much as 50 metric tonnes per year of liquefied natural gas (LNG) exports. The discoveries could hold as much potential value as 30 to 40 times the current GDP of Mozambique,” says Ernst & Young in its report.

Jim Hackett, executive chairman of Anadarko, said last year in a statement that “this could be one of the most important natural gas fields discovered in the last 10 years, with significant long-term benefits for Mozambique”.

“In parallel, we’ve continued to advance an expandable LNG development that will support this world-class field. This is great news for Mozambique, as our ongoing activities will continue to spur meaningful investment in the region, generate significant revenue for the government and offer a multitude of opportunities for the people of Mozambique,” he added.

2. Proximity to Asian markets: East Africa’s gas is important not only due to the size of the reserves, but also because of the region’s relative proximity to markets in Asia, said Adi Karev, global oil and gas leader at Deloitte Touche Tohmatsu.

“This is rather close to the largest potential market for LNG, which is Asia. It is easier to export from offshore Mozambique to Asia than it is from many other places,” Karev told How we made it in Africa in an interview.

3. Gas master plans essential: Many African countries don’t have great track records of converting oil and gas riches into financial prosperity for their people. Norway, on the other hand, is an excellent example of a nation that benefited tremendously from its oil and gas industry. In 1971, around the time when oil production first began, the parliament of Norway established “The Ten Oil Commandments” – principles by which the country’s oil and gas industry would be developed.

Elias Pungong, Ernst & Young’s Africa oil and gas leader, says that Mozambique and Tanzania need to put in place master gas development plans. “African governments and regional NGOs will of course have critical roles to play – first and foremost, developing a meaningful and practical master gas development plan, one that addresses the upstream tax and licensing models, as well as the necessary infrastructure issues and investments, and local training and job creation issues. Collaboration and partnerships with the international oil companies, both big and small, will likewise be critical.”

4. Many risks: East Africa’s gas industry will depend largely on demand from Asia. However, there is a risk that this demand will be less than expected by the time the region is ready to export gas.

Eliot Pence, a director at The Whitaker Group in Washington, D.C., said that East Africa can face significant competition from gas fields currently being developed in other regions, such as those off the coast of Australia. “I think in general the narrative about East Africa’s gas finds has tended to underestimate the influence parallel projects will have on demand for East African gas.”

“If you assume that the primary markets for East Africa’s gas will be India, Japan, South Korea and maybe China, each country has multiple potential other suppliers, or are themselves potential suppliers. For example, if Russia gets around to building an undersea pipeline to Japan, that knocks out almost half the global demand,” Pence explained.

The East African countries will also first need to secure financing to develop natural gas infrastructure. “The narrative also tends to understate the risks associated with financing, specifically whether Tanzania and Mozambique can find the capital to cover their carry in the infrastructure costs,” he added.

5. Opportunities for other industries: “The ramp-up in exploration and production activity brings opportunity for the oilfield services segment, but again, not just for the big international players, but also for local and regional companies that can contribute to the supply chains and to the associated upstream support infrastructure,” says Ernst & Young’s Pungong. “The associated development or expansion of a domestic gas demand sector could also bring substantial commercial opportunities in the power generation, industrial and even transportation sectors.”

Gas companies and their employees also require a range of other facilities and services, including offices, hotels and supermarkets. Northern Mozambique’s port city of Pemba is a good example. Traditionally known as a tourist destination, Pemba has become an important centre for northern Mozambique’s offshore natural gas industry. Brett Abrahamse, a director at Johannesburg-based real estate consultancy Terrace Africa, noted that Pemba has a lack of accommodation and retail facilities.

“An example of the problem with Pemba is there is one five-star lodge that is booked out by the oil companies. The interesting story there is that post the 2008/2009 financial crisis the resorts were struggling, but since they found gas there, these hotels and lodges have been booked out by people working on the gas fields,” said Abrahamse.