South Africa’s tech start-up scene is widely assumed to be buzzing, with innovation hubs, new businesses and VC funds springing up across the country. But how many could actually make it big? Tom Jackson takes a look at five start-ups with products that could make them major players in South Africa and beyond. 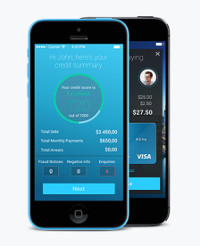 Having launched as a platform for crowd-sourced T-shirt designs, the Springleap team realised they could further diversify their product, becoming a premium design community that assists brands in accessing thousands of creatives for design projects. The genius of Springleap is that its model could sit at the heart of any agency, allowing them to access a huge variety of talent and skills globally.

In a way, Springleap has already made it big, having expanded out of Cape Town to Johannesburg and New York. Late last year, it raised a US$400,000 in funding, and is in the process of entering Middle Eastern and other African markets. It counts the likes of Samsung, SABMiller, Nestlé, Kraft, and Ogilvy amongst its clients.

GoMetro is a mobile app that provides information on public transport, including train times, line announcements and updates. It recently also launched a mobile site available to commuters in all of South Africa’s 11 official languages. What the company does is simple but hugely necessary, not just in South Africa but in much of the developing world.

Online content in South Africa and the rest of the continent is growing, but still in its early stages. 8Bit will make it because it is in the process of establishing itself at the heart of South Africa’s online media world. A content recommendations engine with a twist, the platform gives users control over what content they display, both on their own site and to the greater 8Bit network.

Its track record of providing content providers with instant boosts in traffic, as well as insights into content consumption, has won it large clients. In my view as the network grows, 8Bit could become as important to an online publisher as Facebook or Twitter.

Find yourself a lucrative niche and make yourself vital within that niche. That is the policy pursued by South African start-up Blink Tower, which started life as a video production company. However, after realising it was competing in a busy market, it zeroed in on explainer videos. Blink Tower simplifies corporate messages into easy-to-understand, animated explainer videos. Current clients include the likes of Vodacom, WeChat and Afrihost. Clients can easily choose between three styles of videos, with the cheapest option starting at around $7,800.

Most of us get paid on the first of the month and are broke by the 15th. Bsavi is a tool that helps people save money. The app allows the user to link all cheque, savings and credit card accounts into one app with a single view, getting real-time daily updates as they transact. Users can then plan a cash flow forecast, with all transactions categorised into spending categories. It also enables customers to instantly open bank accounts or apply for loans.

The company is well placed to succeed as it launches at a moment when banking is increasingly becoming something you do rather than a place you go to. And by going one step further than other mobile financial tools the company is infinitely scalable in both the developing and developed worlds.