Due to the nascent stage of its economies, Africa offers potentially lucrative returns for both local and international companies with a knack for spotting opportunities and the ability to think outside the box. One multinational company that has been particularly successful at navigating Africa’s unique business environment and turning challenges into opportunities is DHL Express. 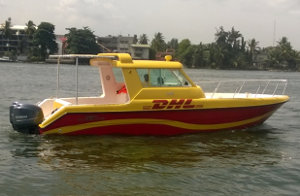 DHL is using a boat to overcome traffic congestion in Lagos.

Taking a leaf from DHL’s book, here are five tips for companies to take their businesses to the next level in Africa.

Nigeria’s commercial hub, Lagos, suffers significant traffic congestion. While there have been improvements, it can still take hours to travel a relatively short distance. For a company like DHL, where speed is of the essence, this presented a serious challenge.

Instead of accepting the status quo, the company found an innovative solution to overcome the problems posed by the city’s traffic gridlocks.

Earlier this year it added a boat to its fleet to transport express cargo via Lagos’ waterways between the international airport and Lagos Island, where the majority of shipment volumes are concentrated. After lengthy negotiations with the Nigerian maritime authorities, DHL was granted permission to operate the boat.

A journey that normally could have taken up to three hours by road, is now covered in only 18 minutes!

Despite Africa’s economic rise over the past decade, much of this growth is off a low base. According to Charles Brewer, Managing Director for DHL Express in Sub Saharan Africa, investors need a long-term approach as the continent’s ascent is likely to be more akin to a marathon, as opposed to the 100m sprint seen in Asia Pacific.

“Most of what DHL has done over the last three decades, and most of what we’ll do in the coming years, is building for tomorrow. So it is not a short-term game. That is why we continue to invest in infrastructure and in our people to make sure we are primed for the continent’s future growth.”

Africa is not a homogeneous market, but rather 50-plus diverse countries that each requires a unique approach. DHL therefore puts considerable faith in their local country teams to do what’s best for their respective territories.

A recent example is when DHL ran a retail point-of-sale promotion in Ethiopia. The typical approach would be to offer discounts or corporate give-aways to incentivise walk-in customers. The country manager in Ethiopia however suggested a better idea – giving customers a voucher for a chicken as part of the Ethiopian Easter celebration.

Africa’s economies are undergoing rapid change – traditional agrarian countries are turning into oil exporters, while those that relied on tourism are transforming into technology hubs. Across the continent, DHL is proactively tapping into these new growth sectors and benefiting from first mover-advantage.

For example, in Malawi, DHL has aligned itself for the anticipated growth in the country’s tourism sector. Both National Geographic Traveller magazine and Lonely Planet have recently identified Malawi has a must-see tourist destination. The recent launch of Malawian Airlines is also expected to bring more visitors to the country.

DHL has entered into a partnership with a major hotel chain that has resorts throughout Lake Malawi, which allows guests to send parcels to over 220 countries and territories, directly from the hotel.

And in Angola, the company has identified agriculture as a growth industry. While the oil and gas sector currently accounts for the largest chunk of Angola’s economic output, the government has committed significant resources to boost farming

“We are building a strategy to support people investing in agriculture to ensure that their products get from A to Z quickly and in a good condition. Agriculture should be the next hotspot for Angola,” says Egidio Monteiro, Country Manager for DHL Express.

Over the past three years, DHL grew its retail footprint from 300 to over 3,300 outlets in Sub Saharan Africa. It did this not by building its own bricks-and-mortar branches, but by partnering with local business owners who act as DHL resellers.

Thousands of vendors – including electronics stores, travel agents and small grocery shops – across the continent now allow their customers to send DHL shipments alongside their normal offerings.

“It’s really a win-win approach. We have given these small shop owners a unique business opportunity to grow their revenues and gain credibility by aligning themselves with an international brand. If they do well, we do well,” explains Sumesh Rahavendra, Head of Marketing for DHL Express Sub Saharan Africa.