Africa, with 60% of the world’s uncultivated arable land, still has to import a large percentage of its food in order to feed its rapidly growing population. The rising cost of importing food can lead to deepening food insecurity. 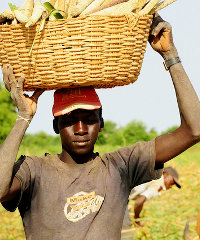 Africa has the potential to feed itself.

Clearly Africa’s reliance on food imports is not sustainable, nor is it necessary. According to a recent World Bank report, the continent can help feed itself and avoid food crises by removing the cross-border restrictions to food trade within the region. In addition, the World Bank estimates that the continent would generate an extra US$20 billion annually as a result.

The removal of regulatory barriers to trade is required in order for Africa to reach its full potential in regional food trade. To do this, the report has identified the following issues that need to be addressed.

According to the report, trade barriers limit access to higher yielding seeds and superior fertilisers that are available elsewhere in the world. It can take two to three years for new seed varieties to be released in African countries. “As new varieties are introduced at a faster rate, Africa falls farther and farther behind in the use of modern seeds making it difficult to compete with imports from the global market.”

The World Bank’s research estimates that the use of improved hybrid maize could quadruple productivity in Ethiopia and, even if only half the farmers in Ethiopia achieved this productivity from hybrid seeds, there would be enough production domestically to replace commercial imports. “But without clarity about regulations, seeds can be held up at borders for long periods, often rendering them useless.”

Access to fertiliser offer a similar problem, especially in landlocked countries where farmers face higher fertiliser prices. “Part of the reason that regional fertiliser markets have not emerged is that individual countries more often specify their own fertiliser blend specifications and specialty products,” explained the report. “Hence, fertilisers cannot move freely from country to country.”

Countries therefore have to import fertilisers from the global market and, as smaller quantity buyers, pay more than bulk importers. According to the report, the solution to this lies in regional imports with common fertiliser specifications.

High transport costs, especially for small-scale farmers, are a major limitation for cross-border food trade. While transport infrastructure – such as roads – do require development, the real urgency lies in regulatory reform that delivers more modern and competitive transport services.

“Estimates suggest that reform that delivers more competition could reduce the cost of transporting staples in West Africa by 50% within 10 years,” highlighted the report. “A different study finds that a 50% reduction in transport costs in Mozambique would increase real agricultural GDP by 7% and also increase agricultural GDP in Malawi by 3%.”

Export and import bans, variable import tariffs and quotas, restrictive rules of origin, and price controls are often determined without transparency, and are poorly communicated to traders and officials at borders, according to the World Bank. This raises the cost of trade, creates uncertainty about market conditions, limits cross-border commerce and curbs private sector incentives to invest in increasing productivity.

“This calls for a more open discussion of trade policies before implementation, with a careful assessment of the costs and benefits as well as more inclusive processes for defining standards to ensure consistency with consumer needs and producer capacities,” said the World Bank.

4. Crossing borders is expensive and dangerous

Hundreds of thousands of Africans cross the continent’s borders daily to deliver food staples. The report stated that these cross border traders, who are mostly women, suffer regularly from harassment and often have to pay bribes.

“Reducing the number of agencies and officials at the border and increasing the transparency and predictability of the policy regime is crucial to provide an environment in which traders flourish and expand their business.”

“Poor people in the slums of Nairobi pay more pro rate for food staples than wealthy people pay at supermarkets,” said the World Bank. “This shows the importance of the distribution sector, and that in many countries the sector is not linking poor farmers and poor consumers.”

Food distribution networks, in many countries, fail to benefit poor farmers and poor consumers, and they need to become more organised to help informal operators participate in evolving distribution sectors, according to the report.

Reforms are also needed to provide the regulatory frameworks for modern distribution services. For example, the lack of licensing and operation rules for distribution companies creates uncertainty and weighs down firms trying to conduct business in the formal distribution sector.