Estimates about the size of Lagos’s population differ widely. While Nigeria’s commercial capital is officially home to around 10 million people, some believe the real figure is closer to 17 million. 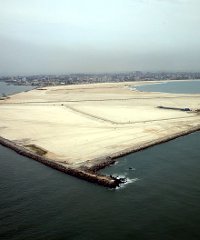 An aerial picture of land reclaimed from the ocean for the Eko Atlantic City project.

Lagos’s rapid growth has come at the expense of good social services and infrastructure, says Alitheia Capital in a recent research report.

“Energy and water access, sewage, transportation and housing have all been adversely affected by the development of a geographically disjointed, poorly planned city,” states the report.

However, over the past six years, the Lagos State Government has implemented several medium and long term initiatives to improve social services and close the infrastructure gap.

According to Alitheia, the outcome of these initiatives is expected to bring to the fore a plethora of opportunities in the real estate sector. “The gains for the Lagos real estate market as a result of these initiatives are tremendous – increasing foreign direct investment chasing after large transactions on the back of successful pilot public-private partnerships (PPPs); new business and business expansion opportunities; and attention and interest in the city from across the globe. It is expected that these will result in a demand for varied, good quality real estate – whether office space, long and short stay accommodation, leisure facilities, larger retail malls and housing.”

The five initiatives with the most significant impact on the real estate sector are:

The Lagos Mega City Plan (LMCP) has been designed as a programme to boost urban infrastructure. The Lagos State Government has approached the private sector to improve transportation, roads, waste management, water supply, power, tourism, property development and manufacturing. According to Alitheia, “a degree of success” has been achieved.

The Lagos State Office of Public-Private Partnerships (PPP) was established in 2008. It aims to operate as a “one-stop shop” for prospective investors.

“Lagos is starting to enjoy the fruits of PPPs and intends to use this mechanism to fund, design, build and operate its infrastructure programmes and has several impactful projects in its pipeline, including the US$2 billion Energy City in Badagry – a project intended to meet both social and environmental objectives. The successful completion of the . . . light rail lines will result in many new possibilities for the real estate sector,” says Alitheia.

Eko Atlantic City is a planned new ultra-high density business and residential district of Lagos, built out of a 9 km2 parcel of land reclaimed from the Atlantic Ocean. The seven sub-districts which make up the development will be linked by 20 km of internal waterways offering eco-friendly public transport, efficient tramways and clear, open roads. It is expected to be home to 250,000 residents with another 150,000 commuting into the city each day. The commercial centre will be anchored by a 50-floor office development with buildings up to 35 floors permitted within this district. The Eko Mall, designed as the largest shopping centre on the continent, will be situated in the business district.

The Lekki Free Trade Zone (FTZ) is expected to be the largest FTZ in west Africa. In addition to being a FTZ, the area will include residential, commercial business and tourism districts.

Traditionally, tenants renting property in Lagos had to fork out two to three years’ upfront payment as well as large annual fees for facilities and back-up services. Under the new Tenancy Bill, it is unlawful for a landlord to demand or receive rent from a sitting tenant that is in excess of six months, in the case of a monthly tenant, or one year, in the case of a yearly tenant. It is also considered a crime for a sitting tenant to offer or pay rent in excess of one year, for a yearly tenant, and six months, for a monthly tenant.