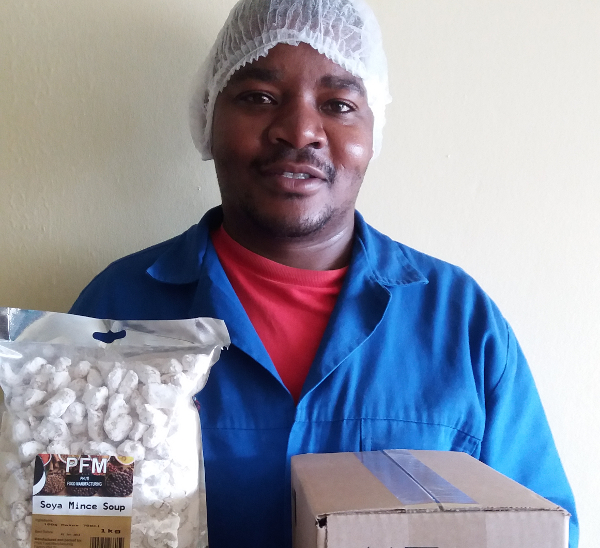 “And after you have found clients… if possible, get letters of intent from them.”

This is a lesson Lamola had to learn the hard way.

He started his company, Phuti Food Manufacturing, in 2015 after over 10 years working for Retailer Brands, a division of Dickon Hall Foods, which produces private label food products for major retailers. His time at Retailer Brands exposed him to the basics of food processing, and he bought the equipment and raw materials to start his own spice operation before quitting in 2014.

“After I resigned I came home and started blending. But once I was finished blending, I was stuck with spices that I couldn’t sell to anyone… It was heartbreaking because I thought I had to go back to work because no one was buying my spices,” he recalled.

“The first five months was very difficult. I had it rough.”

He eventually set up taste tests with owners of spaza shops and community grocers, who said his products needed to be better packaged and equipped with barcodes (for inventory purposes) before they would stock them. It was only once he got his packaging right that he managed to get his spices into stores.

His lesson: start-up food manufacturers need to first do their market research, and discover what potential clients are looking for, before they start a production line. “You cannot just manufacture things in bulk [first] because you will sit with them in bulk.”

Lamola has taken his own advice with his second product – which is a highly nutritious and flavoured soya mince soup. He has identified a demand for this among government agencies who supply poverty-stricken schools with food, as well as state institutions like correctional services and hospitals. This time Lamola invested first in market research by speaking to government agencies as well as existing suppliers. At the moment his soya mince soup is undergoing quality-control testing.

The business plan for the soya mince soup helped Lamola to be selected as a finalist for the SAB KickStart Ignite entrepreneurship competition.

He urges aspiring food manufacturers to invest in quality assurance and conduct thorough taste tests with potential customers who will not be afraid to give an honest feedback.

“And, if possible, cut prices where you can [in the beginning] – so you can actually get in the market. You can increase the prices as time goes on.”