At the heart of African economies is agriculture. Staple foods, including livestock and meat, cereals, pulses, roots and tubers represent the main source of calories in sub-Saharan Africa. In West Africa, home of nearly 300 million people, agriculture employs 60% of the labour force. However, despite great potential, the region is increasingly dependent on food imports to meet its consumption needs; food imports have more than tripled in the past 10 years. 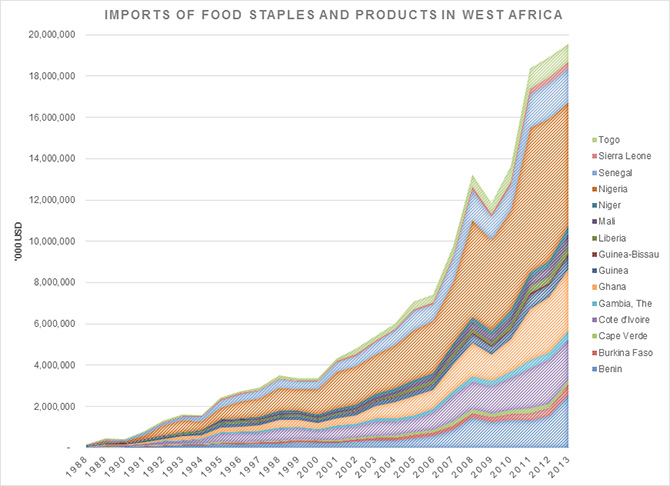 Connecting food staples and input markets in West Africa, a new report from the Africa Trade and Competitiveness Practice, reviews how the building of a West African regional market for food staples has so far come short of promises and should become a priority in the agricultural policies of West African states.

In the wake of the 2008 food crisis and rising world food prices, the impetus for West African countries to review their agricultural policies became particularly acute. West Africa’s low production capacity was particularly exposed at the time, and the region appears increasingly unable to feed itself. Rapid urbanisation and recent economic growth, furthermore, have made populations increasingly reliant on commerce and trade for their consumption – a far cry from historical patterns of agricultural auto-consumption.

The food crisis also revealed a contrast between an increasingly heavy reliance on world markets, but comparatively lesser use of regional markets. The crisis also exposed poor policy coordination and response mechanisms within the region.

Not exploiting regional complementarities represents a missed opportunity. West Africa can help feed itself. The physical nature of West Africa’s agro-ecological zones alone provides a strong rationale for regional collaboration, with soil and rainfall patterns cutting across neighbouring countries and creating natural, cross-border economic markets. The map shows a geo-simulation on six member countries of the Economic Community of West African States (ECOWAS); Burkina Faso, Ghana, Togo, Benin, Nigeria and Niger, and how markets (the colour shaded zones), defined as the shortest road distance between consumers and market places (shown by dots) naturally stride the borders between these countries. 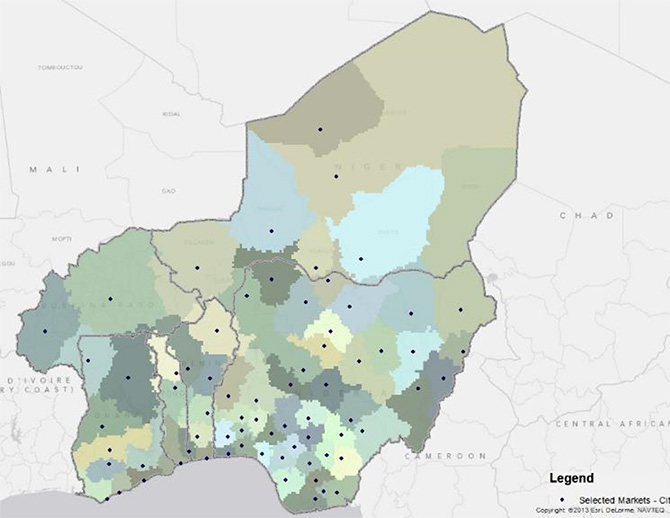 ECOWAS has long recognised in its common agricultural agenda the central role food staples play in combatting food insecurity and poverty, yet policies to create a regional market have not yet been translated into national implementation, and regional markets remain highly fragmented.

This is despite existing natural cross-border markets, and trade in food staples is actually already vibrant – even as policies are missing – finding its way through informality. According to recent estimates discussed in the report, informal trade is rampant for most products, accounting for at least ¾ of intraregional trade in staples.

Yet, many ECOWAS member states continue to pursue the sole goal of national self-sufficiency, passing on the costs of these policies to consumers, sometimes offsetting with government consumption subsidies, while taking away precious opportunities from producers and ultimately failing to establish secure internal markets anyway. In the context of thriving cross-border markets, shrinking agricultural communities and changing urban tastes, this model appears doomed to fail. Political economy pressures often lead ECOWAS governments to satisfy short-term interests through trade bans and protection, and subsidy policies, at the expense of their direct neighbours. This, along with severely lacking inputs including financing, transport, and warehousing infrastructure, have kept supply chains fragmented and exclude smallholders and small traders from the formal sector.

Through collective action, rather than beggar-thy-neighbour strategies, governments are most likely to develop secure markets for food staples. A more regional approach towards agricultural policy would bring countries the familiar gains from trade, including lower prices and greater variety for consumers, higher prices for producers in many cases, as well as solidarity mechanisms through which excess supply can easily connect with excess demand anywhere in the region. This, combined with leveraging the instruments of trade openness, such as better logistics – starting with reforming transport, warehousing, and post-harvest management, and the facilitation of trade procedures through the actual implementation of the ECOWAS Trade Liberalisation Scheme – and the realisation of regional markets for inputs such as seeds, fertilisers and pesticides, could help achieve the twin goals of food security in West Africa and an integrated regional market for staples and inputs.

ECOWAS is uniquely placed to facilitate, coordinate and enforce such a transition and has already done so in some areas. As the report highlights in its analysis of seed and fertiliser markets, there is a very active regional agenda and ECOWAS institutions have shown initiative and leadership, most notably through the adoption of harmonised trade and quality control rules in 2008 and 2012. Challenges, however, persist, most markedly perhaps in the huge variety among ECOWAS member states’ capacity and willingness to adhere to community commitments. Indeed, doubts have been raised about the ability of some members to implement commitments that require strong administrative capacity, while many ECOWAS initiatives and regulations lack visibility and transparency and are not easily accessible even for those members who wish to implement them.

In order to establish a stable food supply in West Africa, ECOWAS member states must embrace regional trade as an opportunity to achieve their food staples development objectives by acknowledging the integral roles played by informal trade and food staple imports, respecting their regional commitments and minimising distortions. Regional policies, however, must complement, not supplant, national ones and be tailored to clearly-identified needs, rather than breaking off into multiple new initiatives before existing commitments are addressed. Moreover, priority must be given to establishing a regional market for inputs in order to boost yields and generate productivity gains that can be transmitted all along the value chain. Finally, states must become more transparent and accountable on trade policy decisions impacting agriculture, as well as relinquish the role they have traditionally played in organising economic activity and instead encourage the private sector to match supply with demand in order to upgrade production throughout the value chain and develop the food processing industries and value addition, as advocated in a recent FAO report, that are still desperately lacking throughout the region.

Food staples belong at the heart of the ECOWAS agenda on agriculture. The importance of cross-border cooperation to secure the food supply, as well as manage common natural resources, regional diseases and security challenges, has been made painfully clear in recent years. Now is the time to act and embrace regional trade for what it is – the opportunity to feed populations, reduce poverty, generate jobs and promote shared prosperity.

Jean-Christophe Maur is a senior economist in the Growth and Competitiveness Program at the World Bank Institute. This article was orginally published on The World Bank’s Blog, Africa Can End Poverty.